COLUMBUS, Ohio – Today, the Portman for Senate Campaign released a web video featuring highlights from Saturday’s Ohio Republican Party State Dinner. At the dinner, Rob Portman, Governor John Kasich, Hugh Hewitt, and ORP Chairman Matt Borges spoke about this year’s Senate race and how we can’t afford a return to Retread Ted Strickland’s Ohio when the state lost more than 350,000 jobs and ranked 48th in job creation. It's clear Republicans are united behind Rob Portman and his campaign, which has more than 1,000 volunteers, 500 full-time summer interns, and has contacted more than 2,000,000 targeted voters through its door-to-door and phone programs. You may click HERE or on the video below to watch highlights from the dinner. 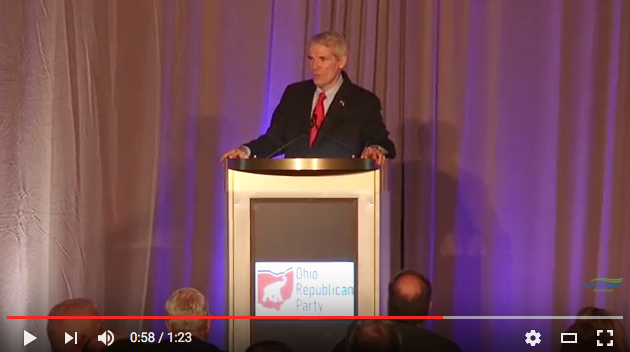 The Portman for Senate campaign is running an aggressive, 21st Century tech-savvy campaign, which includes these highlights:
Last month, the Portman for Senate Campaign was the first Senate campaign in the country to reserve airtime through Election Day, placing more than $14 million in statewide television airtime and $1 million in YouTube inventory through Google's advertising network. The effort will use highly sophisticated targeting methods to deliver community specific content across Ohio.