Ted Strickland's Case of the Mondays

CLEVELAND, Ohio - The Portman for Senate Campaign had an impressive day yesterday when it hosted more than 500 Rob Portman interns and volunteers from each of the campaign’s 10 field offices and over 30 college campuses around Ohio at its Volunteer Appreciation Event. The group filled an auditorium on the Tri-C Metropolitan Campus and heard from Rob, Jane, Former Speaker of the House Newt Gingrich, and U.S. Senator Joni Ernst. On display were the unprecedented grassroots efforts that the campaign launched more than a year ago and that have now contacted 2.8 million targeted swing voters.

Meanwhile, Ted Strickland had a serious case of the Mondays. First, he was blasted for being "racially insensitive" by Chinese American advocates when he used fortune cookies for a failed political attack. Then, Ted shamefully criticized Rob, Habitat for Humanity, and dozens of volunteers for helping to rehab an entire city block of nearly 17 homes in Cleveland. Attacking Habitat for Humanity is shameful even by Ted Strickland's standards.

While Ted was making blunders at press conferences, the Portman campaign was highlighting its grassroots organization and thanking hundreds of volunteers at Tri-C. You may click HERE or below to watch our recap video. 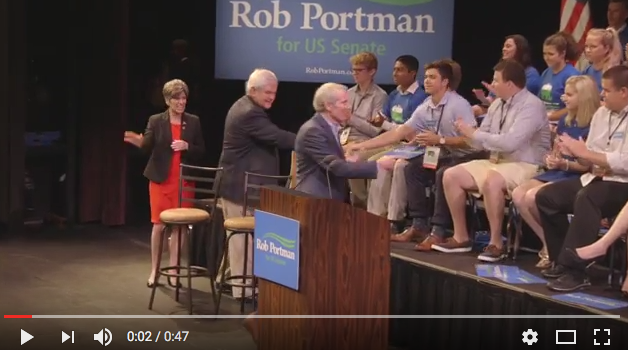 Here is what they had to say about Ted’s “racially insensitive” comments:

Ohio Statehouse News Bureau: It’s former Gov. Ted Strickland who’s taking flak for the use of what some are calling “racially insensitive” propaganda.

Lisa Wong with the Organization of Chinese Americans, Cleveland Chapter: Creating propaganda like that creates racial tension and there are already Asian Americans in the United States that already have issues with the typecast as ‘foreigner.’ And something like this doesn’t help because he’s capitalizing, he’s banking on people’s negative feelings about China and that affects us here as Chinese Americans.

Johnny Wu with the Organization of Chinese Americans: A representative who has been once a governor of Ohio is doing something that is hurting the citizens that are living in the state and not deciding to be careful of the diverse culture here in the city