COLUMBUS, Ohio – Over the weekend, after spending last week "lashing out" at the United Mine Workers of America and the Ohio Conference of Teamsters for not supporting his retread candidacy, Ted Strickland took to Youngstown TV to try and further explain why he lost the support of the Teamsters. Unfortunately for him, Ted's latest excuse does not match reality. That fact is Ohio Conference of Teamsters - representing over 50,000 members from across Ohio - compared the records of both candidates and concluded there is only one person in this race who has a proven record of fighting for Ohio families and that is Rob. Now that he has attacked the mine workers and Teamsters, it's only a matter of time before he criticizes the Fraternal Order of Police (FOP) of Ohio's decision which resulted in a 290-10 vote in support of Rob.

You may click HERE or on the video below to watch Strickland further muddy the water on why he is losing support and why the momentum is behind the Portman for Senate Campaign. 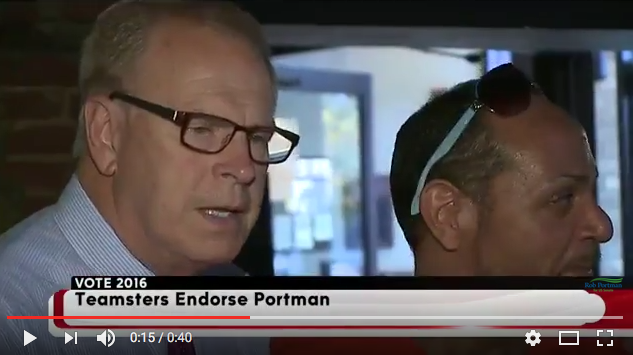 “Ted Strickland is so desperate and is continuing to attack unions full of hardworking men and women throughout Ohio – the very people he spent last month begging for their support. Ted’s latest criticism is shameful and smacks of desperation as his campaign continues to hemorrhage support and money,” said Portman Campaign spokesperson Michawn Rich. “The fact is the United Mine Workers of America, the Ohio Conference of Teamsters, and the Fraternal Order of Police of Ohio all compared the records of both candidates and concluded there is only one person in this race who has a proven record of fighting for Ohio families and that is Rob.”

Background:
Last week, the Ohio Conference of Teamsters - representing over 50,000 members from across Ohio – and the Fraternal Order of Police (FOP) of Ohio – the state's largest law enforcement union representing more than 25,000 members – endorsed Rob’s re-election to the U.S. Senate. In June, the United Mine Workers of America also endorsed Rob.

Fresh off Rob receiving back-to-back union endorsements last week, the Wheeling Intelligencer editorial page detailed exactly why Ted Strickland is losing support saying, “Strickland’s tenure was a time of economic backsliding for many Ohioans.” You may click HERE to read the editorial in its entirety.