COLUMBUS, Ohio – While Ted Strickland certainly made news today, it's probably not what he had in mind for his campaign's reset, which included launching his first television ad a month earlier than planned. Instead, Ted's been confronted with blowback about his extremely insensitive comments regarding Justice Scalia's death. You may click HERE to listen to the audio of Strickland’s remarks (full transcript is below).

Don't just take our word for it, here is what they are saying: 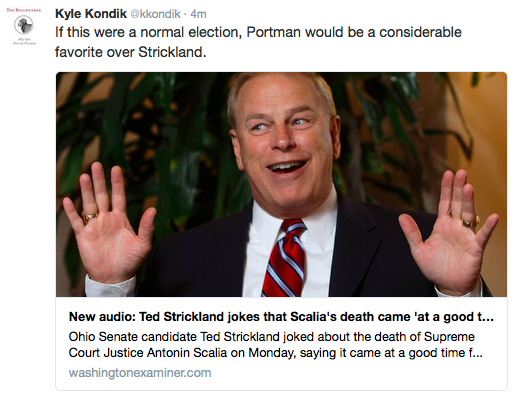 Washington Post: Political protip: If you’re about to joke about the death of a Supreme Court justice — don’t

Full Transcript:
“In three-and-a-half months we’ll make a decision about who occupies the executive branch, what Party controls the Senate, and growing out of those two decisions will be the future of the United States Supreme Court. My friends, a lot of average citizens out there don’t understand the importance of that court. I mean, the death of Scalia saved labor from a terrible decision. And I don’t wish anyone ill, but, it happened at a good time! Because, once that decision had been made it would have been tough to reverse it. And so, everything that we care about – labor rights, voting rights, human rights, environmental policy – everything we care about will be at risk if a Donald Trump and a Republican Senate can refashion that Supreme Court.”