COLUMBUS, Ohio – The Portman for Senate Campaign issued the following statement in advance of Ted Strickland’s damage-control tour through Appalachia. The tour comes in response to the devastating “political blow” Strickland received last week when the United Mine Workers of America’s (UMWA) National Council of Coal Miners Political Action Committee (COMPAC) endorsed Rob Portman for his leadership protecting Ohio’s coal jobs. COMPAC endorsed Ted Strickland in 2006 and 2010 when he ran for Governor.

“As the saying goes, when you are responding, you are losing. Ted Strickland was so devastated to lose the UMWA endorsement that he has decided to launch a damage-control tour through Appalachia,” Portman for Senate spokesperson Michawn Rich said. “The fact is Ted Strickland turned his back on Appalachia when he moved to D.C. for his 'dream job' being paid $250,000 to lobby for the anti-gun, anti-coal, pro-tax, pro-Obamacare Center for American Progress. Strickland’s damage-control tour through Appalachia is just another attempt to paper over his awful record and the fact that the UMWA endorsed Rob Portman last week. When Appalachia learns that Ted Strickland turned his back to become a liberal D.C. lobbyist, I would be surprised if there is a single person in the region who votes for him.”

This graphic shows the "changes" Ted Strickland has made over the years: 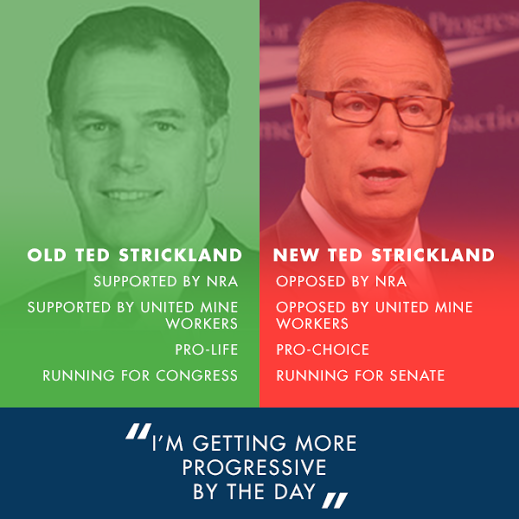 And in 2014, COMPAC endorsed these prominent Democrats for Senate:

Ted Strickland has refused to denounce Hillary Clinton’s comments attacking coal workers when she said that, if elected, “we’re going to put a lot of coal miners and coal companies out of business.” In a press release, Rob Portman condemned Clinton’s remarks and called on Ted Strickland to denounce them.

Ted Strickland voted for the bill in Congress that included an energy tax, despite knowing it would damage a number of his district’s employers and cost Ohio consumer and businesses $1.3 billion. "[Strickland] said the energy tax would hurt some industries in his district, including a paper plant in Chillicothe, an air freight hub in Wilmington, coal mines in Meigs County and an uranium enrichment plant in Piketon that, alone, uses nearly $1 million in electricity per day." (Columbus Dispatch, 4/6/93)