Strickland Made Devastating Cuts to Education

May 04, 2016
COLUMBUS, Ohio – Today, as part of the Portman for Senate Campaign’s budget week, we are exposing former Governor Ted Strickland’s devastating cuts to education. Despite his newfound campaign rhetoric and attempts to hide from his record, when Ted Strickland was governor he forced devastating budget cuts that left no student untouched.

“While Ted Strickland likes to tour college campuses and pose for photo ops, the fact is while he was governor, Ohio lost more than 350,000 jobs and ranked 48th in job creation. Ted Strickland cut funding for colleges and universities by $170 million in addition to cutting funding for preschools, literacy programs, school bus purchases, the Early Learning Initiative, and the School for the Deaf and the School for the Blind. College students want jobs -- and that's what left our state on Ted Strickland's watch. One thing is clear: students can’t afford to go back to Retread Ted’s Ohio,” said Christian Pancake, Kent State University, Chairman of the Ohio College Republican Federation. "Rob Portman is the only one in this race who is truly looking out for Ohio students. I am proud to be one of Rob’s 30 college campus co-chairs and eager to continue spreading Rob’s message and pro-growth policies for better wages and more jobs.”

In September, the Portman for Senate Campaign launched its Students for Portman coalition with campus coordinators on nearly 30 college and university campuses across the State of Ohio. This group helps the Portman campaign organize and mobilize students on campus and will help communicate Rob Portman’s record to ensure that every student who wants a good job after graduation can find one. Click HERE or on the video below to watch the “Students for Portman” video. 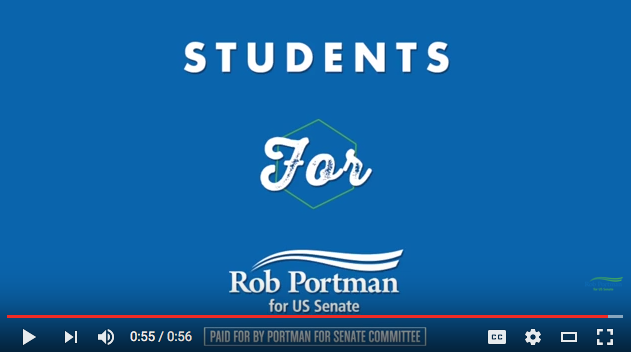 The Portman for Senate campaign is running an aggressive, 21st Century tech-savvy campaign, which includes these highlights:
Since the Primary, the Portman campaign has purchased numerous Snapchat "geofilters." The filters showed support for Rob Portman, and reminded users of Ted Strickland’s awful record as Governor when the state of Ohio lost more than 350,000 jobs, support for the Obama-Biden failed foreign policy agenda, and awful record on China.

The Portman for Senate campaign is also using locally targeted online banner ads highlighting Ted Strickland’s failed record. You can click below for examples of each:
Background on Strickland’s Cuts to Education:
Columbus Dispatch editors called the Strickland administration “one of the most dysfunctional in Ohio history” (The Columbus Dispatch, Editorial, October 1, 2009)

“Forces in the legislature are pushing to revert to the same careless attitude of a few years ago, when Gov. Ted Strickland and the Democrat-controlled House spent the state into a disastrous $8 billion shortfall. (The Columbus Dispatch, Editorial, August 15, 2012)

“The budget agreement also cuts by $170 million over two years the primary source of state funding to higher education. So instead of the tuition freeze in 2010 as Strickland proposed, state universities and colleges will be able to raise tuition by 3.5% over each of the next two years.” (The Columbus Dispatch, July 11, 2009)

Strickland’s budget in 2009 cut funds for The Early Learning Initiative - a preschool program for poor children. Ohio slashed preschool programs more than any other state in the nation, according to a new report. The state-by-state analysis found that Ohio cut the largest percentage of funding from preschool education and, as a result, will deny services to the largest number of children. (The Columbus Dispatch, October 23, 2009)

Rob Portman’s Bipartisan Record of Standing up for Ohio Students and Making College Accessible and Affordable:

Senator Portman is a leader in Congress on efforts to grow jobs and opportunity for all Ohioans while also helping those who have fallen through the cracks.  Portman is the author of the Senate Republican Jobs Plan and has been a strong advocate for reforming our outdated and inefficient tax code, regulatory reform efforts to get rid of burdensome red tape, improving our worker retraining programs, repealing and replacing Obamacare, expanding exports, getting our budget under control, and many other proposals to expand job creation in Ohio and around the country.

Portman has worked across the aisle to encourage greater college access for low-income students.  He is the author of the bipartisan Go To High School, Go To College Act, which will increase college access for low-income students by incentivizing them to earn college credits in high school through the Pell Grant program.  Portman also authored a bipartisan amendment that was signed into law earlier this year as part of the Elementary and Secondary Education Act (ESEA) reauthorization to allow low-income students at early college high schools and dual enrollment programs to received college credits tuition-free.

Portman is also the co-chair and co-founder of the bipartisan Senate Career & Technical Education Caucus to advance efforts to equip workers with credentials, certificates, and other training that will match them with open jobs.  More than 3.5 million jobs across the United States remain unfilled because employers are unable to find workers with the right skillset for the jobs available. It is estimated that by 2018 over two-thirds of the jobs in the United States will require at least some postsecondary education.