COLUMBUS, Ohio - On this day six years ago, the Columbus Dispatch released a scathing report showing that women comprised just 37 percent of all appointments Ted Strickland made during his time as Governor. The report also showed that on Strickland’s watch there was a 20 percent pay gap for women in top state jobs and that on average, female employees earned $2.17 an hour less than their male counterparts. An official with the Institute for Women’s Policy Research even called the pay gap “significant.” Below are some excerpts from the report, which may be viewed in its entirety by clicking HERE.

Overall, female state employees earned on average $2.17 an hour less than their male colleagues. That's an improvement from 2007, when women were paid $2.70 an hour less.

Still, Hegewisch said a 20 percent wage gap between men and women in top state jobs is significant. "The highest-paid jobs often have larger gaps, but it surprises me that there is such a marked difference," she said. "Generally, in the public sector, they have been fairly good at narrowing the wage gap."

Of Strickland's 1,725 appointments to boards and commissions since taking office in 2007, 37 percent were women and 16.5 percent were minorities.

“It is hard to imagine a worse advocate for women than Ted Strickland. Ted didn’t care about women when he was governor considering Ohio women made up only 37 percent of his appointments and there was a 20 percent pay gap for women in top state jobs. Nothing would be scarier for Ohio women than Ted Strickland returning to elected office. On the other hand Rob supports equal pay for equal work and believes it is wrong for a woman to get paid less for the same work. I am proud to help lead Women for Portman, which has nearly 2,000 members and is organized in communities across Ohio.”

Strickland is not a leader when it comes to ensuring equal pay for equal work:

Also in 2010, The Columbus Dispatch reported that female state employees were paid less than men, and that on Strickland’s watch there was still a 20% pay gap for women in top state jobs. On average, female employees earned $2.17/hr. less than their male counterparts. An official with the Institute for Women’s Policy Research called the pay gap “significant.” (The Columbus Dispatch, July 12, 2010)

Women were disproportionately hurt in former Governor Ted Strickland’s economy when Ohio lost over 350,000 jobs, some to other states, and ranked 48th in job creation.

Rob Portman is a leader when it comes to ensuring equal pay for equal work:

Rob supports the Workplace Advancement Act (S. 2200), legislation that prohibits retaliation against an employee for inquiring about, discussing, or disclosing the wages of the employee.

In October, the Portman for Senate campaign announced the launch of Women for Portman, a group of women from across Ohio who are backing Rob Portman’s re-election to the U.S. Senate. Led by Jane Portman, Jo Ann Davidson, Betty Montgomery, and Mary Taylor, and with nearly 2,000 women already signed up to help the effort, Women for Portman help engage, inform and inspire women across Ohio to get more involved with the Portman for Senate campaign. There are also twenty Women for Portman chairs at Ohio colleges and universities who will focus on organizing their campuses.

Comprised of business leaders, elected officials, civic leaders, students, and women who care about their community, their state, and their country, this organization is an active component of the Portman for Senate campaign.  Women in the group recognize that Rob has the integrity, the intelligence, and the work ethic to get things done for the people of Ohio and to continue to be an outstanding senator for our state and country.

The Portman campaign also released a web video from Jane Portman, Jo Ann Davidson, and Betty Montgomery highlighting why they are supporting Rob’s reelection and are co-chairing this effort. You may watch the web video by clicking HERE or on the video below. 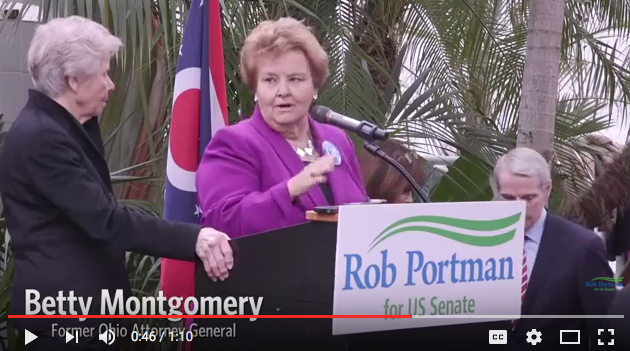