COLUMBUS, Ohio – Yesterday, Rob wrapped up a successful day 10 of his "Countdown to Victory" RV tour making stops with Ohio native and legendary golfer Jack Nicklaus in Columbus and Dayton, and wrapping up his day with WTOL's Jerry Anderson at the campaign's Terrace Park office. Rob's "Countdown to Victory" RV tour is off to an impressive start having already made stops in Columbus, Brecksville, Toledo, Akron, Dayton, Canton, West Chester, Terrace Park, Athens, Marietta, Uhrichsville, Carrollton, Springfield, Findlay, and Cincinnati. The stops have included meetings with members of our campaign's seven coalitions, union members who have endorsed Rob, and thousands of volunteers who - just like 21 out of 23 newspapers - agree Ohio can't afford to go back to the days of Ted Strickland's Ohio. In total, Rob's “Countdown to Victory” RV Tour will make 80 stops across 35 counties and cover over 4,000 miles.

Here is a review of day 10 of Rob's "Countdown to Victory" RV Tour:

Monday, October 31st:
Rob, Jane, and Ohio native and legendary golfer Jack Nicklaus and his wife Barbara stopped by the campaign's Columbus and Dayton field offices to meet with and thank Portman for Senate interns and volunteers with a week until Election Day. Be sure to click HERE or on the video below to watch a recap of their day. 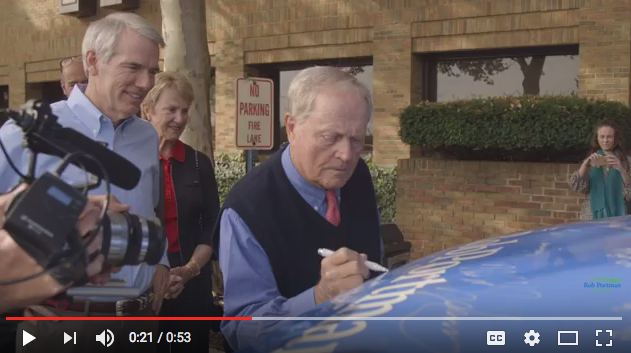 Here is what they had to say:
WDTN: Legendary golfer and Ohio native Jack Nicklaus campaigned for Republican Senator Rob Portman 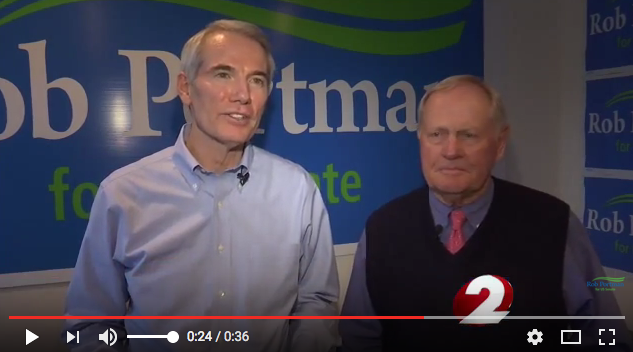 WSYX: Senator Portman and Nicklaus are on a "Countdown to Victory" RV tour 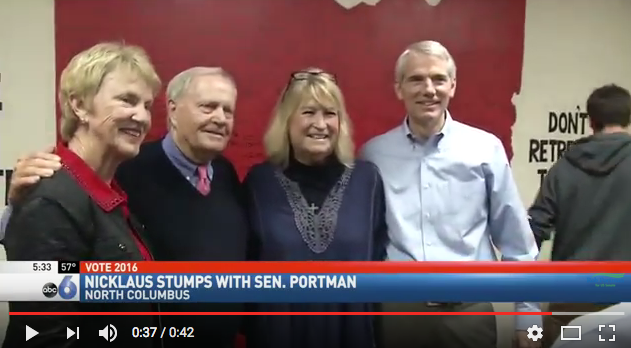 WRGT: Nicklaus was by Portman's side today at the Dayton field office 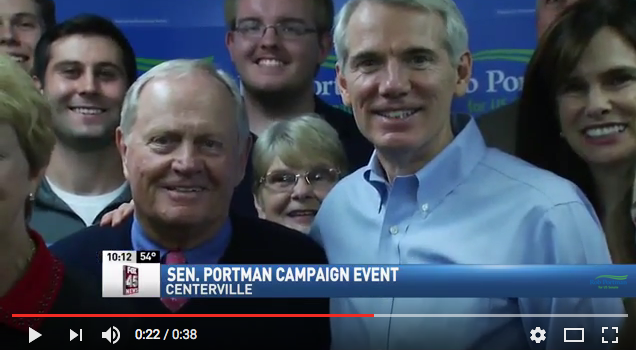 In September, Jack Nicklaus endorsed Rob saying, "Today I'm concerned about our country and our state, that's why I am supporting my friend Rob Portman for U.S. Senate. Rob is the real deal, he's making a difference in standing up for American manufacturing, and he's fighting to strengthen our military to keep us safe. Rob Portman is Ohio's champion." In addition to the endorsement, the Portman for Senate Campaign released a TV ad featuring Nicklaus. The ad, "Ohio's Champion," was the first time Nicklaus has appeared in a political ad. You may click HERE to watch "Ohio's Champion."

Following the Dayton field office visit, Rob made his way to Terrace Park and was joined by WTOL's Jerry Anderson. Rob and Jerry discussed the Portman for Senate unprecedented grassroots campaign, which has contacted more than 5.3 million Ohio voters since May of last year. Perhaps the most noteworthy aspect of the interview was the army of interns and volunteers who were hard a work calling voters - the Terrace Park office alone has made more than 1.2 million targeted voter contacts. Be sure to click HERE or on the video below to watch Rob's interview with Jerry. 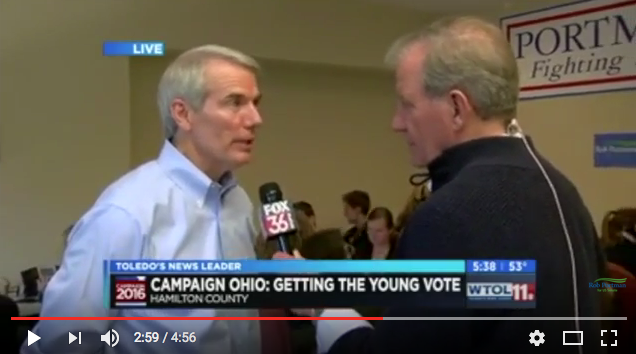 Finally, the Canton Repository became the 19th newspaper to endorse Rob Portman after receiving a string of endorsements from major newspapers across Ohio. The Repository cited Rob's record of getting results for Ohio on the heroin epidemic, human trafficking, and unfair trade practices, adding that "it's abundantly clear why poll after poll show Portman, Ohio's junior senator, with a commanding lead over the former governor in this battleground state." Be sure to click HERE to read the editorial in its entirety.

Photos from day 10 of Rob's "Countdown to Victory" RV tour: 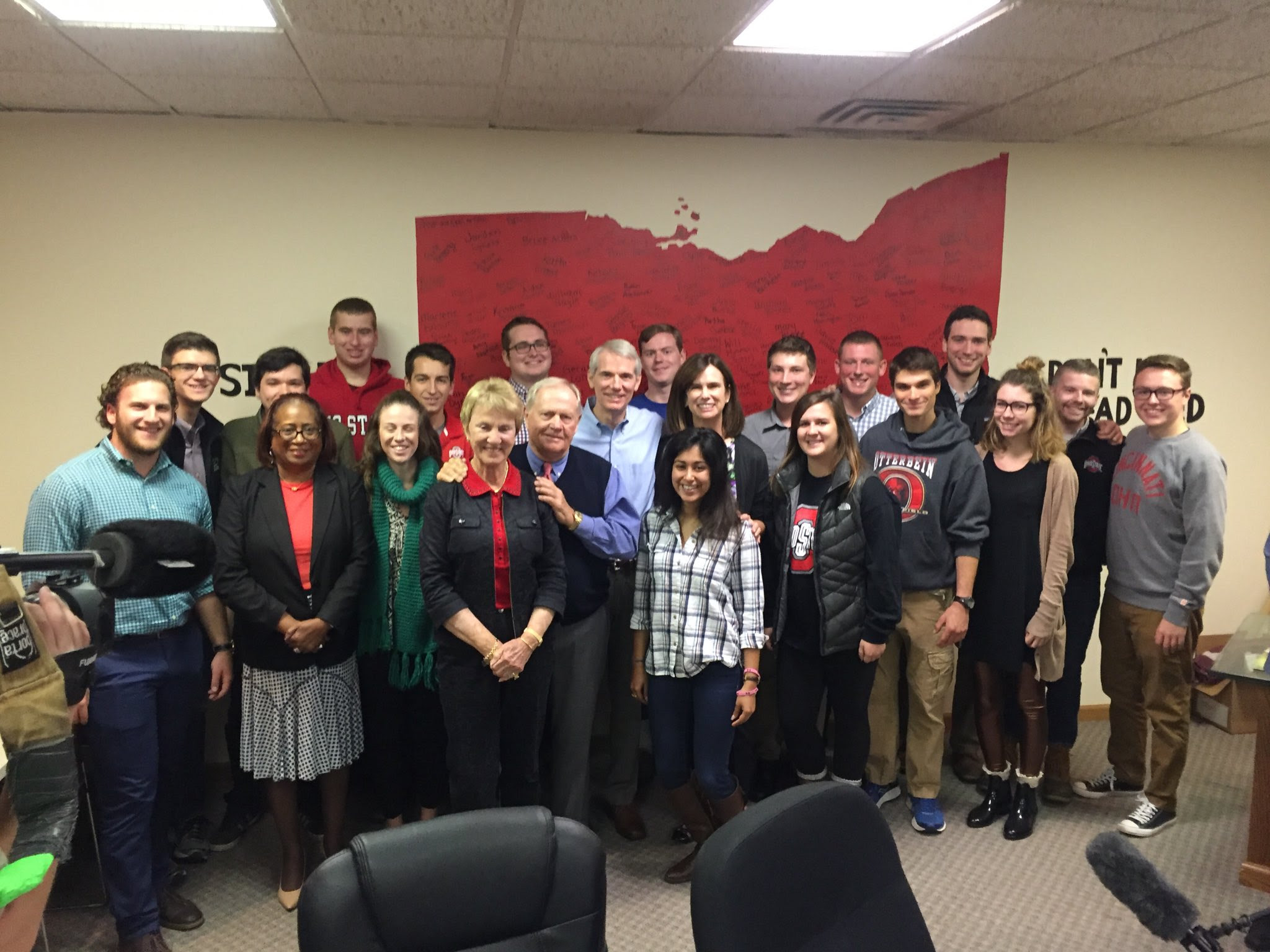 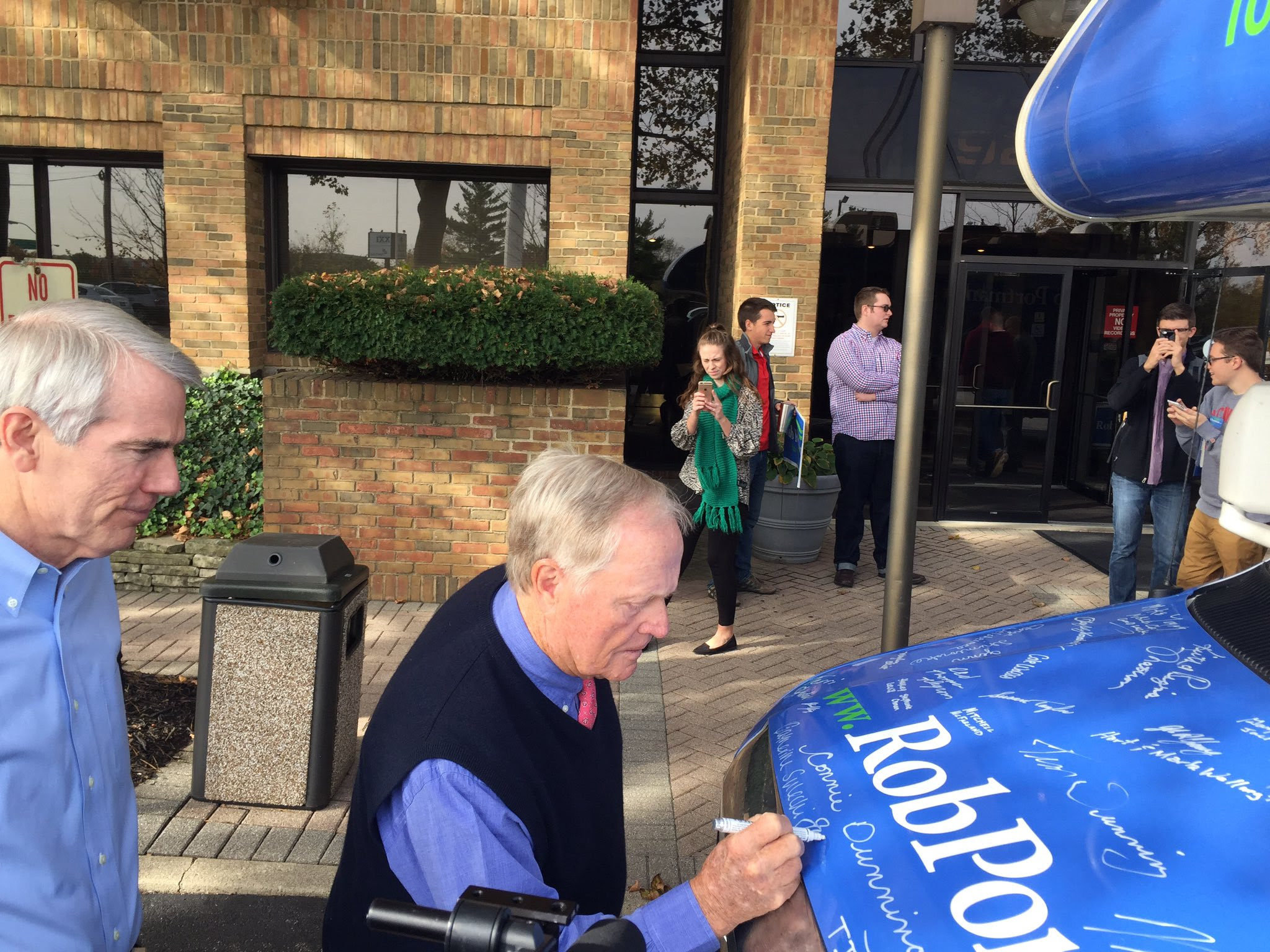 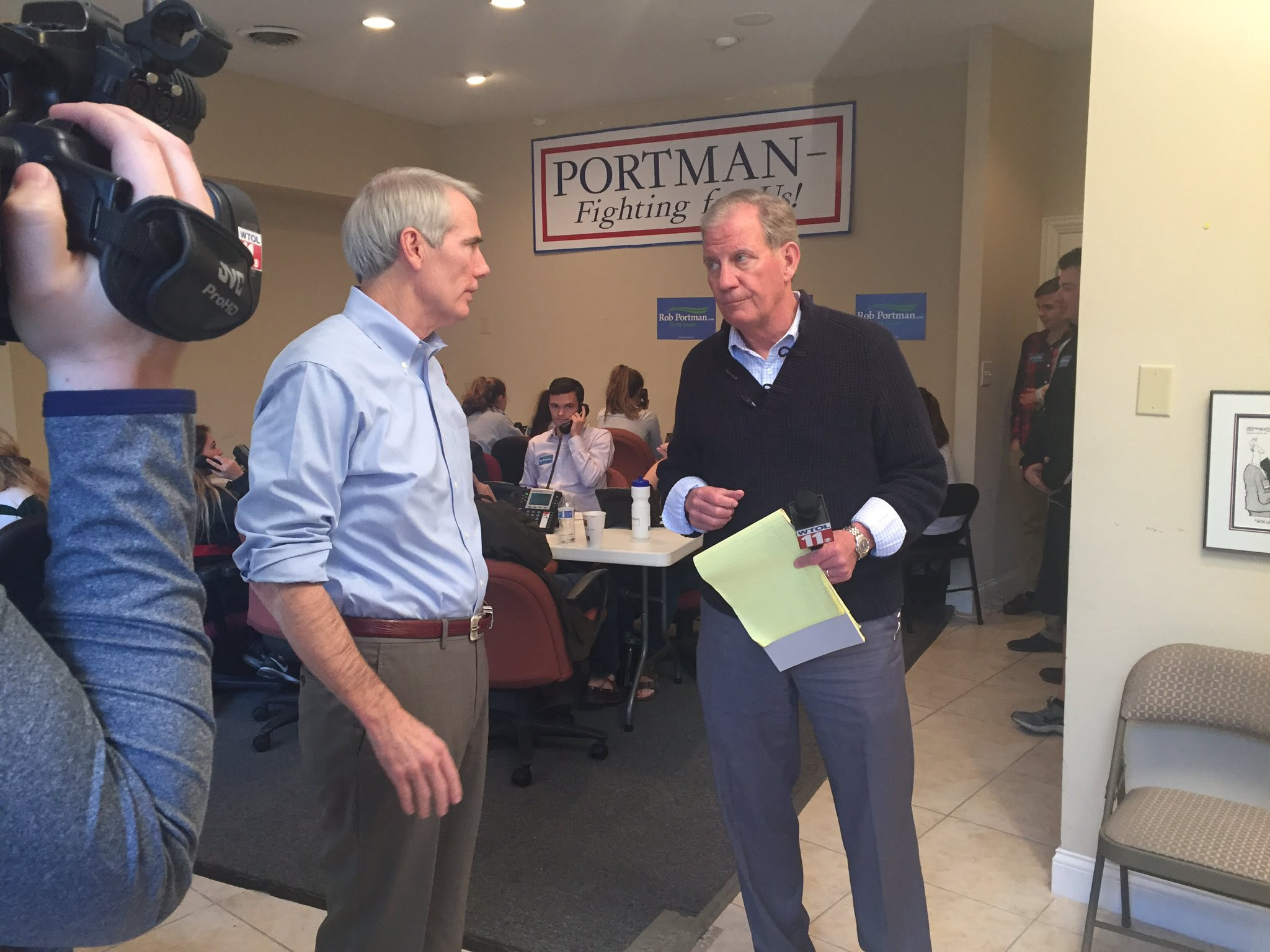 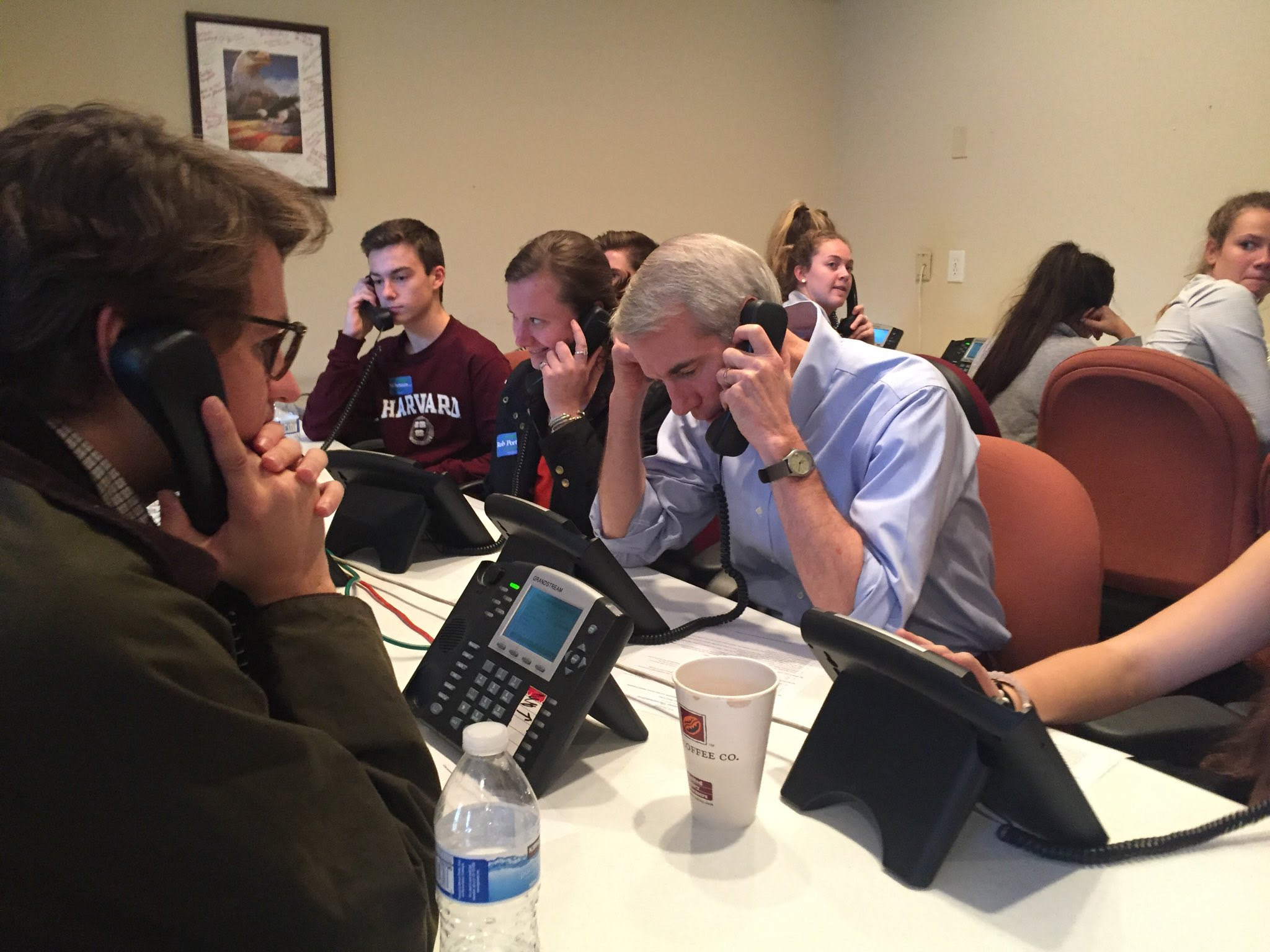