COLUMBUS, Ohio – Yesterday, while Ted Strickland's favorite law - Obamacare - clinched headlines, Rob made multiple stops in central Ohio as part of his “Moving Ohio Forward” Summer RV Tour - which will make 50 stops across 30 counties and cover over 3,500 miles. Over the next two weeks, the tour will make stops with members of our campaign's seven coalitions, union members who recently endorsed Rob, and thousands of volunteers who all agree Ohio can't afford to go back to the days of Ted Strickland's Ohio.

Among Rob's stops yesterday were an endorsement event with the Ohio Veterans United - a group of veterans that agrees Rob is the only candidate in this race with a proven record of standing up for Ohio veterans and their families - a keynote speech at the Franklin County GOP Judicial Salute, and a board meeting with the Ohio Farm Bureau Federation.

Before we get to what they had to say about Rob's Ohio Veterans United endorsement, we didn't want you to miss this report from WHIO in Dayton about Rob's growing union support: 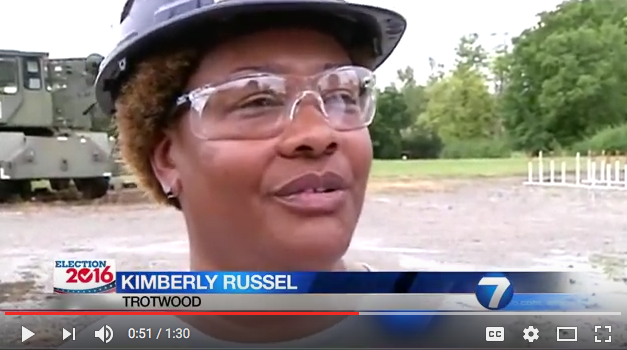 And here is what they had to say about Rob's Ohio Veterans United endorsement:

Portman's "support of veterans is lengthy, is without end," said retired Air Force Col. Tom Moe, the group's founder, during an event at Hilliard Memorial VFW Post 4931 in Columbus.

Moe pointed to the Cincinnati-area Republican's sponsorship of the Veterans Missing in America Act, passed in 2012 to help identify remains of veterans so they can be interred at a national cemetery.

Portman said he will continue to support veterans in any way that he can.

"They exemplify the best of America. They've given their time, their effort, their resources for us. They've put their lives on the line for us," the senator said. "The least we can do is honor their sacrifice and keep the promises that we've made to them."

Moe founded Ohio Veterans United after campaigning on behalf of Republican John McCain for president in 2008.

...The group has endorsed some Democrats, such as Zach Scott for mayor of Columbus last year.

Moe and J.D. Williams, the group's co-chair who ran as a Democrat for state representative in 2010, both serve on the Portman campaign's Veterans Leadership Council.

Asked about Trump Aug. 17, Portman said he's focused on running his own grassroots U.S. Senate campaign in a battle that could determine the balance of power in that chamber.

"We had 1,500 volunteers over the weekend helping us to contact over 100,000 voters," Portman said. "That's never been done in Ohio before. No other campaign in the country is doing this."

He added, "The next week and a half, we've got about 40 stops over about 25 counties. We're doing our own thing, we're running our own independent campaign. "I don't focus on the presidential because this is the Senate race. It's a really important Senate race. I'm asking voters to choose between me and Ted Strickland/ The majority of the Senate may well hinge on what happens in Ohio."

Portman's stop in Hilliard Aug. 17 focused on veterans issues, with the senator promising to push for his Medical Evaluation Parity for Servicemembers legislation and other policies to assist military men and women.

Sen. Portman meanwhile held a campaign event in Hilliard Wednesday where he accepted the endorsement of Ohio Veterans United.

It's without end," he said during a speech at the VFW Post 4931 in the Columbus suburb.

Sen. Portman talked about his work on the "Veterans Missing in America Act of 2012," the "Medical Evaluation Parity for Servicemembers Act of 2015" and the additional funding for veteran's courts through the "Comprehensive Addiction and Recovery Act."

"I am honored to receive the endorsement from the Ohio Veterans United and will continue to ensure all veterans receive our steadfast support for the sacrifices they and their families have made and continue to make for this country," he said.

Afterward, he contrasted his record with that of Mr. Strickland's, saying the former governor's record of accomplishments during his time in Congress is lacking. 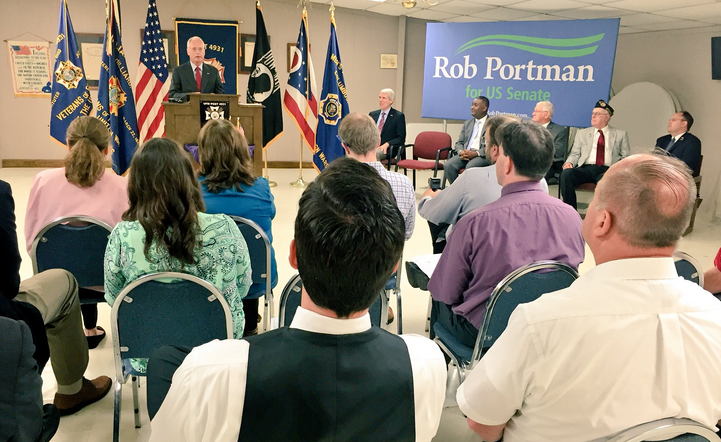