COLUMBUS, Ohio – While Ted Strickland was not seen in public yesterday and faced headlines such as "Strickland's comments on Scalia shameful" and "Why Have Some Unions Endorsed a Republican for Senate?," Rob made his way to Cleveland and Akron as part of his “Moving Ohio Forward” Summer RV Tour - which will make 50 stops across 30 counties and cover over 3,500 miles. Over the next two weeks, the tour will make stops with members of our campaign's seven coalitions, union members who recently endorsed Rob, and thousands of volunteers who all agree Ohio can't afford to go back to the days of Ted Strickland's Ohio.

Among Rob's stops yesterday were a roundtable with Ukrainian and Eastern European Leaders as well as a lunch cookout with the Akron Fraternal Order of Police Lodge #7. In July, the FOP of Ohio – the state's largest law enforcement union representing more than 25,000 members – endorsed Rob’s re-election to the U.S. Senate.

For those keeping track, this is the fourth union to endorse Rob as he was recently endorsed by the United Mine Workers, the Ohio Conference of Teamsters – representing over 50,000 members from across Ohio – and the International Union of Operating Engineers (IUOE) Local 18 - representing over 15,000 workers across Ohio. Each of these unions - representing more than 100,000 workers - analyzed the records of the two candidates in this race and concluded that Rob is the only candidate they can trust to fight for Ohio workers and families. It's important to note that each of these unions previously endorsed Ted Strickland.

...Since June, the Ohio Fraternal Order of Police, to which the Akron chapter belongs, is among four unions that have endorsed the pro-business Republican, whose support from the U.S. Chamber of Commerce makes him an unlikely favorite of organized labor...

But Portman’s union appeal is unusual. It includes endorsements from coal miners, police officers and Teamsters who’ve backed Strickland in the past.

“We go with whichever candidate has our back,” said Frank Williams, president of the Akron chapter. “This time it’s a Republican.”

Aboard a blue RV littered with signatures from supporters, Portman rolled into Akron to thank police officers for their endorsement.

His campaign estimates that, with the help of more than 1,500 volunteers, 100,000 voters have been contacted since he launched the two-week trip Saturday.

The Akron stop was scheduled in late July, days after delegates of Ohio’s police union voted 297-10 to support Portman over Strickland. The union backed Strickland for governor and Portman for Senate in 2010. The national police union, which typically endorses Republicans, plans to announce its presidential preference next month.

Local members applauded Portman’s efforts to fight opioid abuse, which officers said is driving a spike in crime and death in Akron this summer. Retirees liked his Pension Accountability Act. The bill, praised by the International Brotherhood of Teamsters, would reverse a 2014 law that makes it more difficult for pensioners to reject proposed cuts to their benefits.

Mike Casper, a Summit County Sheriff’s deputy, said Portman has their backs. “We know what’s going on in today’s society,” he said, alluding to the shooting of police officers in retaliation for the deaths of unarmed black men.

It’s “the thin blue line between chaos and safety,” said Portman, referencing a Georgia officer killed Saturday. “Its like fair game now. Almost every week there’s someone being shot at. Officers are losing their lives, making the ultimate sacrifice. So I want to stand up with you guys.” 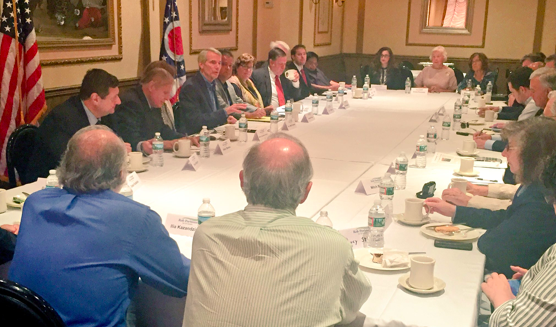 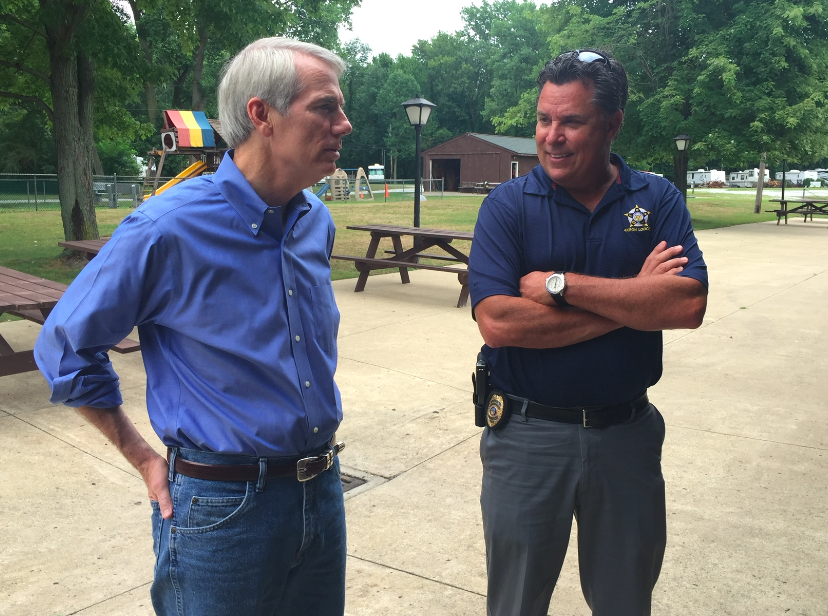 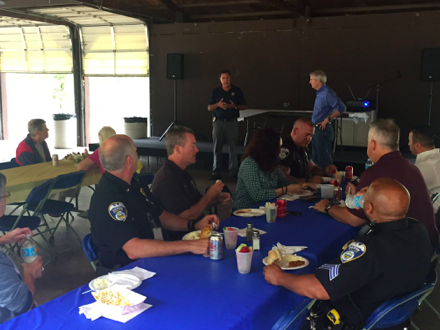 Here is what they had to say:
ideastream: Friends, Family Remember Former Congressman LaTourette