COLUMBUS, Ohio – Today, the Portman for Senate Campaign released its latest TV ad, "Strong," highlighting Rob's endorsement from the Fraternal Order of Police (FOP) of Ohio - the state's largest law enforcement union representing more than 25,000 workers - and featuring Ohio FOP President Jay McDonald. The Ohio FOP endorsement was considered a major "political blow" for Ted Strickland considering the union endorsed the former governor in 2006 and 2010. "Strong" begins running statewide today and is a part of the campaign's $15 million ad reservation. You may click HERE or on the video below to watch "Strong." 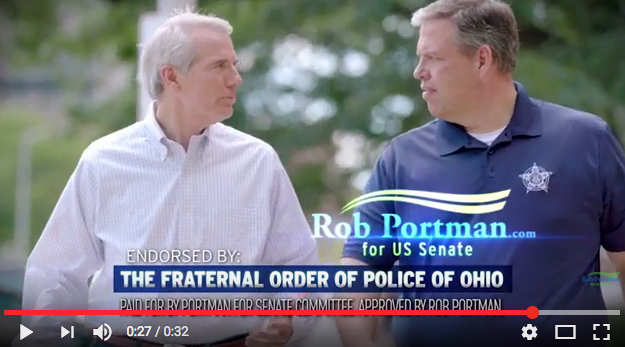 From Ohio FOP President, Jay McDonald: "Law enforcement in Ohio needs a Senator who will have our backs. That’s why when we looked at both candidates in the race for United States Senate, the FOP of Ohio decided to endorse Rob Portman. Rob stands up for law enforcement and he knows how to bring Republicans, Democrats, and Independents together to help address the challenges facing our state and nation. Rob has been a leader in fighting the prescription drug and heroin epidemic that is gripping our state. His legislation - the Comprehensive Addiction and Recovery Act - will help Ohio communities start to fight back and it will help save lives."

Script:
Jay McDonald: I'm Jay McDonald, President of the Fraternal Order of Police of Ohio. Ohio's Police officers need a Senator who will have our backs and after examining the candidates' records, the FOP endorsed Rob Portman. He's always stood strong for law enforcement, and no elected official in America is doing more to fight back against the heroin epidemic than Senator Portman. Please join Ohio law enforcement in supporting Rob Portman. He's on our side.

Voiceover: Rob Portman - endorsed by the the Fraternal Order of Police.

Background:
Earlier this year, the Ohio Conference of Teamsters - which represents over 50,000 members from across Ohio - the United Mine Workers of America, and the International Union of Operating Engineers (IUOE) Local 18 - representing over 15,000 workers across Ohio - endorsed Rob for U.S. Senate. The union endorsements represent over 100,000 Ohio workers who analyzed the records of the two candidates in this race and concluded that Rob is the only candidate they can trust to fight for Ohio workers and their families. The momentum is certainly behind the Portman Campaign as Republicans, Independents, and even Democrats are rallying in support of Rob.

In September, ACT Ohio, the political arm of the Ohio State Building and Construction Trades Council (OSBCTC) – an AFL-CIO affiliated union representing more than 94,000 construction workers in Ohio – announced their decision to stay neutral in the Ohio Senate race despite endorsing Ted Strickland in previous races.

Rob is a Leader in the Fight to Combat the Prescription Drug and Heroin Epidemic: For more than 20 Rob has been fighting to combat the illegal use of drugs that is a root cause of many crimes in Ohio. More than 20 years ago, Rob founded the Coalition for a Drug-Free Greater Cincinnati. He chaired the coalition for nine years, served on the board, and was even a member of the board when he was elected to the U.S. Senate.

Rob co-authored the bipartisan Comprehensive Addiction and Recovery Act (CARA), which tackles the prescription drug and heroin epidemic head on by expanding education and prevention efforts, helping law enforcement reverse overdoses to save lives, and expanding treatment and recovery programs. Rob began this legislative effort in 2014 and President Obama signed this historic legislation into law earlier this year.