COLUMBUS, Ohio – Yesterday, as Ted Strickland refrained from appearing in public, Rob continued traveling the state on the campaign's "Moving Ohio Forward" Summer RV Tour and received the support of the Ohio Farm Bureau at an event in Crawford County. The Summer RV Tour will make 50 stops across 30 counties and cover over 3,500 miles. In the span of two weeks, the tour will make stops with members of our campaign's seven coalitions, union members who recently endorsed Rob, and thousands of volunteers who all agree Ohio can't afford to go back to the days of Ted Strickland's Ohio.

"The organization, which boasts more than 200,000 members, designated Portman a “friend of agriculture” on Tuesday, after a flurry of labor unions have formally backed Portman over his challenger, Democrat and former Gov. Ted Strickland.

"Strickland’s campaign has publicized his efforts to engage with the Ohio Farm Bureau, promoting photos on social media showing the Democrat meeting with members of the group. Strickland also appeared on the Ohio Farm Bureau’s radio program in April to discuss agricultural issues." 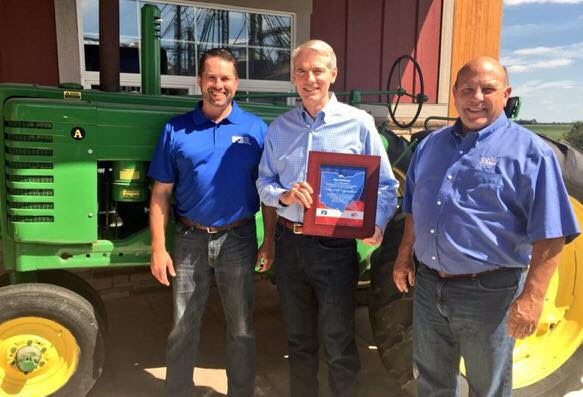