COLUMBUS, Ohio – Following three key newspaper endorsements from Cleveland, Akron, and Youngstown yesterday, the Portman for Senate campaign today released its latest web ad, "Newspapers Agree," highlighting this month's endorsements of Rob by (in chronological order) the Cincinnati Enquirer, the Columbus Dispatch, the Akron Beacon Journal, the Youngstown Vindicator, and the Cleveland Plain Dealer. The Akron and Youngstown papers previously endorsed Strickland for governor as well as Rob's Democratic opponent in 2010. The newspapers highlighted Rob as a "superior candidate," pointing to his record of results for Ohio, including his work to combat both the heroin epidemic and human trafficking, as well as Strickland's failure to "offer his own clear road maps," saying "it's hard to believe Strickland could make a difference in the Senate." You may click here or below to watch "Newspapers Agree." 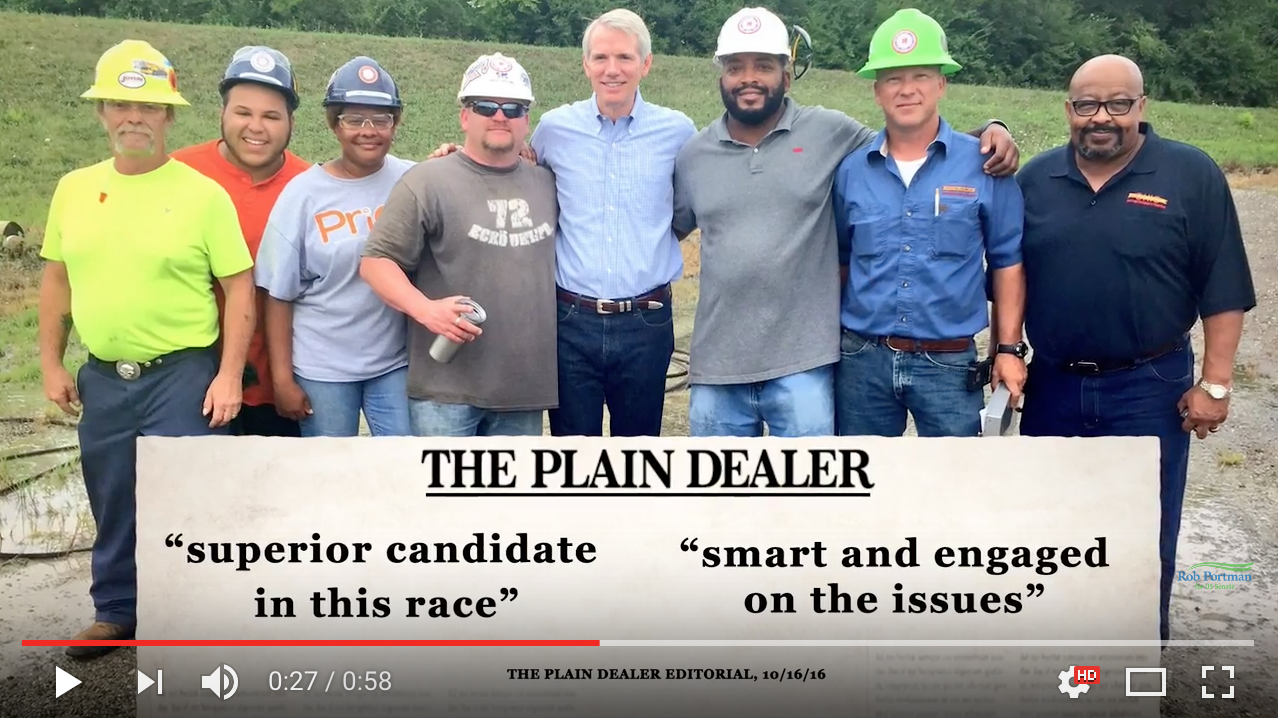 What are newspapers saying about the race for U.S. Senate? They say Retread Ted seems “disengaged and stale.” He’s "failed to offer his own clear road maps” and “it’s hard to believe Strickland could make a difference in the Senate.”

That’s why newspapers across Ohio are endorsing Rob Portman. The Cleveland Plain Dealer says Portman is “the superior candidate in this race” and that he’s “smart and engaged on the issues that matter to Ohioans.” The Columbus Dispatch called Portman’s track record in the Senate “impressive.”

The Akron Beacon Journal said Ohio voters “can count on the Senator to know the issues.” The Cincinnati Enquirer says Portman is the only candidate in the race with the “energy and ideas necessary to represent Ohio's interests”

And the Youngstown Vindicator endorsed Portman for another term.

Rob Portman, endorsed by newspapers across the state - getting results for Ohio.

So far, The Cleveland Plain Dealer, Crain's Cleveland Business, The Cincinnati Enquirer, The Columbus Dispatch, The Courier, The Akron Beacon Journal, and the The Youngstown Vindicator have all endorsed Rob for U.S. Senate.

The Cleveland Plain Dealer endorsed Rob pointing to his bipartisan work to protect Lake Erie, his effort to pass a comprehensive heroin recovery bill, and his ability to reach across the aisle on job creation and retention efforts. The Plain Dealer said Rob has the "proven ability, understanding and energy to help Ohio citizens and businesses prosper" and that "on every level, Portman is by far the superior candidate in this race -- smart and engaged on the issues that matter to Ohioans, including working people." Of Strickland the editorial board said, "it's hard to believe Strickland could make a difference in the Senate."

The Cincinnati Enquirer announced its endorsement of Rob Portman for the U.S. Senate, pointing to his work on finding solutions to the heroin and prescription drug epidemic, combating human trafficking, fighting against unfair trade, and his leadership advocating for Hamilton County that includes fighting for the replacement of the Brent Spence Bridge among other issues. The Enquirer said, "In his first term as senator, Portman has been a hard-working public servant, often reaching across the aisle for the good of his Greater Cincinnati constituents and the country as a whole," that "Strickland's grasp of the issues isn't as detailed as Portman's, nor are his proposed solutions," and finally that "just one candidate in this Senate race has the energy and ideas necessary to represent Ohio's interests and move our country forward."

The Columbus Dispatch announced its endorsement of Rob Portman for the U.S. Senate pointing to his work to pass more than 45 bills into law, on finding solutions to the heroin and prescription drug epidemic, combating human trafficking, and cutting through bureaucratic red tape in order to deliver results for central Ohio. The Dispatch said Portman stands out for his hard work and "has established an impressive track record, having gotten 45 bills signed into law. Of particular note is his leadership in combatting human trafficking and opioid addiction."