COLUMBUS, Ohio — The Portman for Senate campaign today announced the launch of Women for Portman, a group of women from across Ohio who are backing Rob Portman’s re-election to the U.S. Senate. Led by Jane Portman, Jo Ann Davidson, Betty Montgomery, and Mary Taylor, and with over 600 women already signed up to help the effort, Women for Portman will help engage, inform and inspire women across Ohio to get more involved with the Portman for Senate campaign. There are also twenty Women for Portman chairs at Ohio colleges and universities who will focus on organizing their campuses.

Comprised of business leaders, elected officials, civic leaders, and women who care about their community, their state, and their country, this organization will be an active component of the Portman for Senate campaign.  Women in the group recognize that Rob has the integrity, the intelligence, and the work ethic to get things done for the people of Ohio and to continue to be an outstanding senator for our state and country.

The Portman campaign also released a web video today from Jane Portman, Jo Ann Davidson, and Betty Montgomery highlighting why they are supporting Rob’s reelection and are co-chairing this effort. You may watch the web video by clicking here. 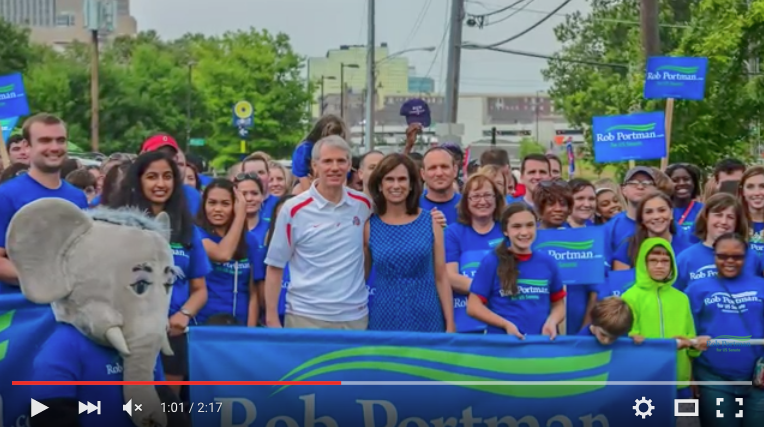 “I’m proud of Jane and honored to have her, Jo Ann, Betty and Mary's help in getting women across Ohio engaged and organized as we work together to increase jobs and opportunity for Ohio workers and families. I'm excited to have this impressive group of women organizing in their communities and on their campuses, and I know they will make an impact in next year's election," said Rob Portman.

“Rob is an expert on a lot of things, but I’m an expert on Rob,” said Jane Portman.  “I’ve seen firsthand how he truly cares about the people of Ohio and is working every day to help make a difference and improve people's lives.”

“Rob Portman is one of the most effective members of the Senate, and he is able to work across the aisle to deliver results to help grow jobs and strengthen Ohio families and communities,” said Jo Ann Davidson.

“Rob and Jane Portman are true, genuine people who care about making Ohio a better place to work and raise a family,” said Betty Montgomery.

“Ohio is lucky to have Rob Portman in the U.S. Senate,” said Lt. Gov. Mary Taylor.  “Rob will help keep Ohio moving forward and knows how to get things done to help our state and our families.”

Women for Portman Co-Chairs
Jane Portman - Jane Portman and her husband, US Senator Rob Portman, reside in the Cincinnati suburb of Terrace Park, OH, where they have raised their three children. In 2004 Jane joined the Board of Trustees at Cincinnati Children’s Hospital Medical Center, where she currently serves as Vice Chair of the board and is on the Capital Campaign Cabinet, the Foundation Board, and is a member of the Family Advisory Committee.  In the past, Jane worked as Director of Communications for The Greater Cincinnati Foundation and was employed at Eureka Ranch, a Cincinnati-based marketing and idea-invention firm.  Jane was named one of the Cincinnati Enquirer’s 2014 class of “Women of the Year” for her engagement in the community; she has been a Girl Scout "Woman of Distinction" and was named "2014 Volunteer Tutor of the Year" by an ESL program in the Cincinnati Public Schools.  She has volunteered with tutoring programs in the several Cincinnati elementary schools, driven a route with the Meals on Wheels program for many years, and been involved with numerous nonprofit efforts throughout Greater Cincinnati to strengthen families, help children, and raise funds for cancer awareness and prevention.

Jo Ann Davidson – Jo Ann Davidson first ran for Reynoldsburg City Council in 1965 before any woman had been elected to council. She did not win. Undaunted, she ran again in the next election cycle. This time she won. She went on to serve ten years as a hardworking member of city council and become chair of its powerful finance committee.  Mrs. Davidson then successfully ran for a seat in the Ohio General Assembly where she served with great distinction for 20 years. She was elected by her peers to be the Speaker of the Ohio House of Representatives in January of 1995. During her historic service as the first woman Speaker from 1995 to 2000, she guided many important legislative initiatives through the Ohio General Assembly including welfare reform, electric deregulation and criminal justice reform.  In addition, Mrs. Davidson has extensive experience in the private sector. Prior to 1994, Davidson worked as Vice President of Special Programs for the Ohio Chamber of Commerce.  Mrs. Davidson serves on the Board of Trustees of the University of Findlay and Franklin University and is a former member of the Ohio State University Board of Trustees.  She formed her own consulting firm, JAD and Associates, and is doing consulting work on a broad range of issues involving public policy development and analysis, strategic planning and political campaigns. She served as Co-Chair of the Republican National Committee from 2005 to 2009.

Betty Montgomery – Betty Montgomery served as Ohio’s first woman Auditor of State, first woman Attorney General, first woman State Senator in District 2, first woman Prosecuting Attorney for the City of Perrysburg and first woman Wood County Prosecuting Attorney.  A dedicated crime-fighter from her earliest days in the workforce, she directed a 250 percent increase in the felony conviction rate of the Wood County Prosecutor’s Office.  As State Senator from the 2nd District in northwest Ohio, Betty Montgomery drafted far-reaching legislation that continues to make a positive difference in our state.  As Ohio Attorney General, Betty Montgomery dramatically increased state support for local law enforcement, as well as rebuilt all of Ohio’s crime labs, introduced DNA and 21st century technology to Ohio.  Betty Montgomery is a graduate of Bowling Green State University (1970) and the University of Toledo  College of Law (1976).  President of Montgomery Consulting Group which was founded in 2007, Betty Montgomery is also an Attorney Of Counsel with MacMurray Petersen & Shuster LLP.  Last year Montgomery was appointed by Governor Kasich to be his Senior Advisor for his Opiate Action Team.  She also Chairs The Jo Ann Davidson Ohio Leadership Institute and serves on the Boards of Prevent Blindness Ohio, the Capitol Square Foundation, the Ohio Women’s Bar Association Foundation and the Ohio Domestic Violence Network Advisory Board.

Mary Taylor - Mary Taylor is Ohio’s 65th Lieutenant Governor and leads CSI Ohio – the “Common Sense Initiative” to reform Ohio’s regulatory policies, as well as to serving as the director of the Ohio Department of Insurance. These two assignments dovetail together and provide the perfect launching pad for working to make Ohio a jobs – and business – friendly state. Taylor was the first certified public accountant to serve as Auditor of State, where she transformed the office into a nationally-recognized, 21st-century government auditing office.  As a state legislator, Taylor was instrumental in passing Ohio’s 2005 tax reform package that reduced personal income taxes by 21 percent. Taylor earned a bachelor's degree in accounting and a master's degree in taxation from the University of Akron. She began her career in 1990 with Deloitte and Touche, one of the “big four” national accounting firms. She joined the Akron firm of Bober, Markey, Fedorovich & Company in 1994, where she served as director of the firm's tax department and senior manager of the employee benefits practice. Taylor is a life-long resident of northeast Ohio where she lives with her husband, Don, and their sons, Michael and Joe.

Senator Portman is a leader in Congress on efforts to grow jobs and opportunity for all Ohioans while also helping those who have fallen through the cracks.  Portman is the author of the Senate Republican Jobs Plan and has been a strong advocate for reforming our outdated and inefficient tax code, regulatory reform efforts to get rid of burdensome red tape, improving our worker retraining programs, repealing and replacing Obamacare, expanding exports, getting our budget under control, and many other proposals to expand job creation in Ohio and around the country.

In May of this year, the Portman for Senate campaign launched an aggressive volunteer grassroots program that recently surpassed 750,000 voter contacts through its door-to-door and phone programs. The campaign recently launched its African American Leadership Council, its Veterans Leadership Council, and the Students for Portman Coalition that has college chairs on over 20 campuses across Ohio. Portman has now been endorsed by the Ohio Republican Party State Central Committee, over 500 key Ohio Republican leaders, including the entire Republican Congressional delegation, all statewide elected Republicans, nearly 90 percent of Republican members of the State House and Senate, and by over 12,000 grassroots leaders across the state. The campaign now has field offices in Cincinnati, Columbus, Cleveland, Toledo, and Dayton.
Facebook Twitter