COLUMBUS, Ohio — The Portman for Senate campaign today announced the launch of the Sportsmen for Portman. The group will help advise Senator Portman on issues impacting the sportsmen’s community and help spread the word about Portman’s strong support of Ohio hunters, anglers, and trappers. In addition to the 16 members of the coalition's leadership council, over 50 Ohio sportsmen and Second Amendment advocates have signed on to help with the group.

"As a lifelong hunter and fisherman, I’m honored to have the support of so many leading sportsmen from across Ohio," said Rob Portman. "Despite the dysfunction in Washington, I’m proud of the results we have achieved to protect Ohio’s natural resources and to stand up for Ohio sportsmen."

The Portman for Senate campaign also launched a web ad today from Chairman Mike Budzik and leadership council member Brad Dysinger highlighting Senator Portman’s record of standing up for sportsmen in Ohio and fighting to protect Ohio’s natural resources. You may watch that ad by clicking below. 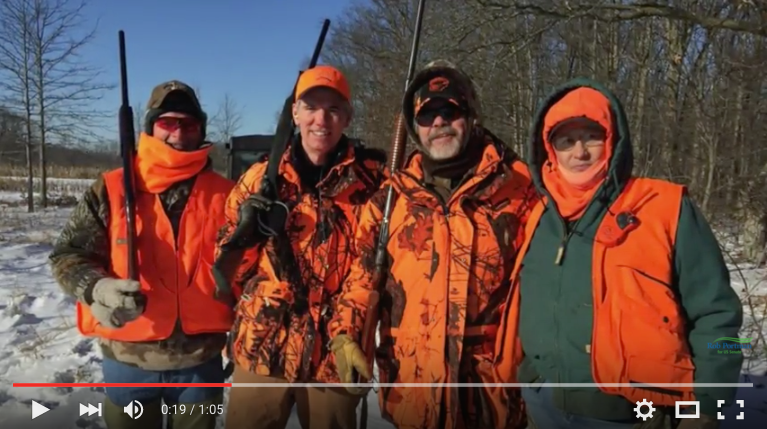 "Rob Portman is a true sportsmen and is someone Ohio hunters, anglers, and trappers can trust to stand up for us in the U.S. Senate," said Mike Budzik.

"While he has pretended to be a hunter, Ted Strickland is no friend of Ohio sportsmen or gun owners," said Brad Dysinger. "Strickland turned his back on Ohio sportsmen when he worked for a liberal special interest group advocating for additional gun laws to penalize law abiding citizens."

"Portman is a leader on stopping invasive species from entering Lake Erie, and he has worked to address the harmful algal blooms that threaten the economy and drinking water in northern Ohio," said Rick Unger.

Background
Rob Portman is a lifelong hunter and fisherman.  In the past year, Portman has gone duck hunting on the marshes on Lake Erie, pheasant hunting in Paulding County in northwest Ohio, turkey hunting in Ashtabula County in Northeast Ohio, dove hunting in southeast Ohio, and walleye fishing on Lake Erie.

Portman is a member of the Senate Sportsmen’s Caucus and is the Vice-Chair of the Senate Great Lakes Task Force.  Portman has an “A” rating from the NRA and was awarded the 2014 Conservation Legislator of the Year Award by the League of Ohio Sportsmen for his work on conservation efforts in the United States Senate.

In the U.S. Senate, Portman has authored legislation that has been signed into law to help address the Harmful Algal Blooms that plague Lake Erie and our other bodies of water in Ohio. Portman saw the algal blooms firsthand this summer while fishing on Lake Erie.  His legislation prioritizes freshwater lakes - like Lake Erie and Grand Lake St. Mary - for the first time. Portman has also authored legislation that has been signed into law that directed the EPA to set the level of allowable microcystins that are safe in drinking water.

Portman is also a co-sponsor of the Sportsmen’s Act.  This legislation includes a number of bipartisan measures to help sportsmen in Ohio and around the country.  It would open additional public lands for hunters, anglers, and trappers, exclude ammunition and fishing tackle from the Toxic Substances Control Act, ensure that decisions about tackle are left to state fish and game agencies and the USFWS, clarify a 2007 law to allow bows to be transported across national park lands, and enact several other bipartisan measures to help preserve and promote our sportsmen heritage.

Portman has also taken a lead in Congress on conservation efforts, including leading the charge to pass energy efficiency legislation to help reduce government waste, lower energy bills for working families, and help create hundreds of thousands of new jobs.
During his time in Congress, Portman authored the Tropical Forest Conservation Act, which has saved over 68 million acres of tropical forests around the globe.  That’s equivalent to taking 17 million cars off the road each year, without risking a single job in Ohio or anywhere else in America.

Portman’s opponent, Ted Strickland is no friend of Ohio sportsmen or gun owners.  During Strickland’s 2006 and 2010 gubernatorial bids, Strickland disclosed that he was not a gun owner. In 2006, he said, “I’m not going to pretend I’m a current outdoorsman.”  So it’s no surprise that Strickland has not had a hunting or fishing license in Ohio since he left the governor’s office in 2010.  And after being fired by the people of Ohio in 2010, Strickland’s true colors came out when he turned his back on Second Amendment advocates and worked for the liberal Center for American Progress in Washington, DC to lobby for additional gun control laws that would hurt law abiding sportsmen and hunters. Strickland can dress up in camouflage for a photo shoot, but he can’t camouflage his failed record of being bad for Ohio jobs, bad for Ohio gun owners, and bad for Ohio sportsmen.