“We are building the most advanced grassroots organization in Ohio history and we are excited about working with thousands of volunteers that know Ohio can’t afford to go back to Ted Strickland’s Ohio,” Portman spokesperson Michawn Rich said. “While Ted Strickland runs his 'invisible' campaign, we are proud to work with our impressive team of volunteers and interns who have helped us contact more than 1.5 million voters since last May. Ohio voters will have a clear choice in November between moving forward with Rob's pro-growth policies for better wages and more jobs, or returning to Ted Strickland’s failed policies of higher taxes, more regulations, and bigger government.”

9:00am - Brecksville Breakfast Kick-Off with Rob and Jane 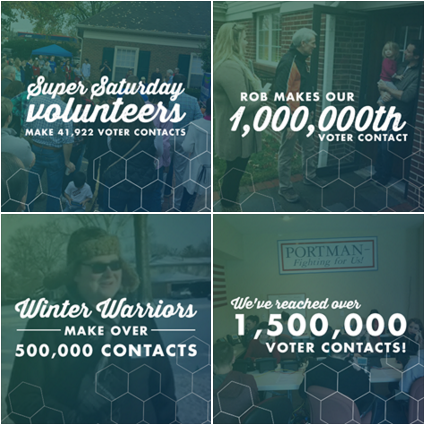 In 2015, the Portman for Senate campaign launched an aggressive volunteer grassroots program that recently surpassed 1,500,000 voter contacts through its door-to-door and phone programs. The campaign has launched five coalitions: the African American Leadership Council, the Veterans Leadership Council, Women for Portman, Sportsmen for Portman, and the Students for Portman Coalition which has college chairs on over 30 campuses across Ohio. Portman has been endorsed by the Ohio Republican Party State Central Committee, over 500 key Ohio Republican leaders, including the entire Republican Congressional delegation, all statewide elected Republicans, nearly 90 percent of Republican members of the State House and Senate, and by over 15,000 grassroots leaders across the state. The campaign has field offices in Cincinnati, Columbus, Cleveland, Toledo, and Dayton.