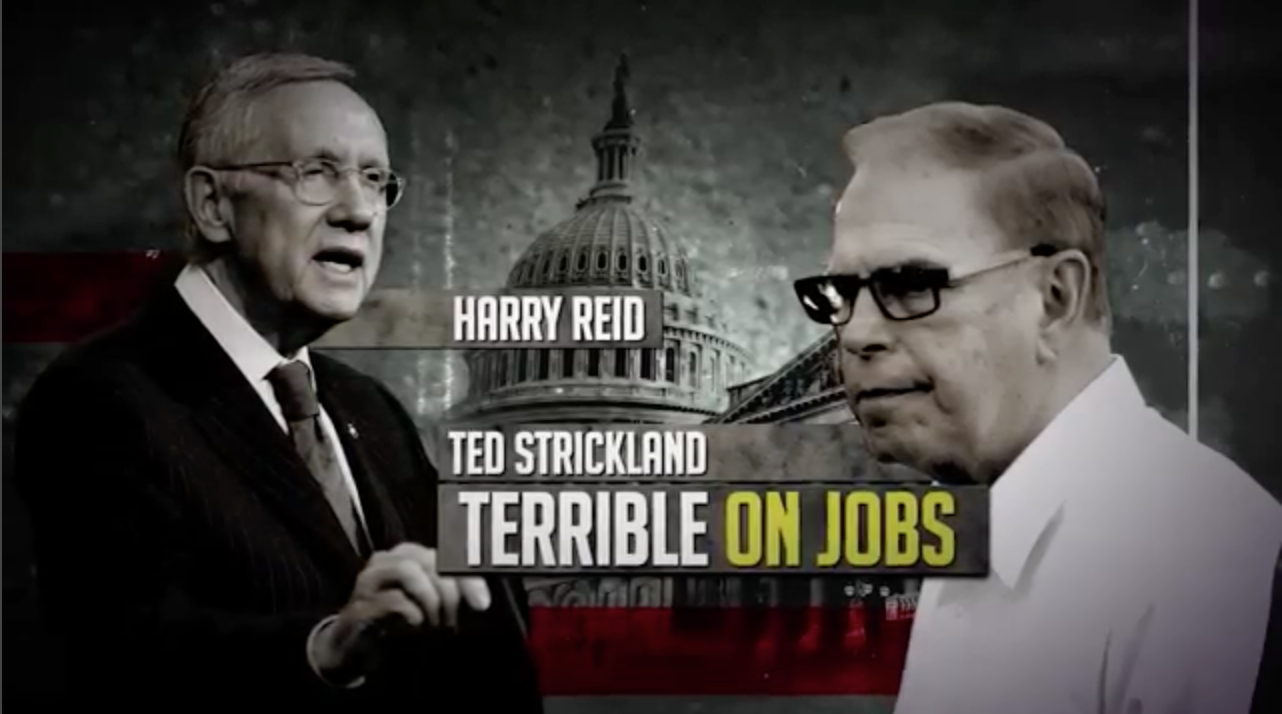 “Ted Strickland has the worst record of any Senate candidate in America and his awful record on China is forcing Harry Reid to spend $3 million just this month on misleading attack ads. Retread Ted talks tough on China, but like many things, his record doesn't match his rhetoric. In Congress, he refused to vote to hold China accountable for unfair trade practices. As governor, despite his strong rhetoric, Strickland's administration opened a trade office in China and he even gave a $4 million taxpayer-funded loan to a now-bankrupt company with a Chinese factory," said Portman spokesperson Michawn Rich.  “On the other hand, Rob is the only candidate in this race with a proven record of being tough on China – even opposing his own party to stop China's currency manipulation and protecting Ohio jobs when China cheats. He is a leader when it comes to leveling the playing field on trade so Ohio workers can compete and win.”

Ted’s awful record on China has resulted in headlines such as: Ted Strickland Was For Free Trade with China, Before He Was Against It and Democratic Senate Candidate Again Under Fire for Misleading Voters. Politifact Ohio labeled Strickland’s first web ad on China “false” and his second web ad criticized Rob for supporting something Ted voted to support – twice! Strickland “forgot” to mention that he twice voted to support China’s MFN status during his time in Congress.

PolitiFact Ohio: We consulted trade experts on both sides of the partisan aisle. They were unanimous that the ad’s statement is fundamentally wrong.

Weekly Standard: Ted Strickland Was For Free Trade with China, Before He Was Against It

Morning Consult: But while Strickland opposed the renewal in 2000, he voted in 1993 and 1994 to retain China’s “most favored nation” status.

Cleveland.com: Strickland, also in the U.S. House in 2000, voted "no" on the bill in question, though he previously voted twice in support of "most favored nation' treatment for China

Ted Strickland’s Record of Cozying up to China:
Strickland voted twice in 2005 against Congressional measures to hold China accountable for their unfair trade practices.
Vote #1: [Thomas] motion to suspend the rules and pass the bill that would establish mechanisms to ensure that China abides by previous trade agreement commitments, including creating a system to monitor compliance with trade obligations on intellectual property rights, market access for U.S. goods, services and agriculture and the accounting of Chinese subsidies. It would authorize an increase in funding for the Office of the U.S. Trade Representative and the International Trade Commission to improve the enforcement of existing trade agreements. (HR 3283, Roll Call Vote 421, July 26, 2005, Overall vote: 240-186, Strickland Vote: No)

Vote #2: Passage of the bill that would establish mechanisms to ensure that China abides by previous trade agreement commitments, including creating a system to monitor compliance with trade obligations on intellectual property rights, market access for U.S. goods, services and agriculture and the accounting of Chinese subsidies. It would authorize an increase in funding for the Office of the U.S. Trade Representative and the International Trade Commission to improve the enforcement of existing trade agreements. (HR 3283, Roll Call Vote 437, July 27, 2005, Overall vote: 255-168, Strickland Vote: No)

As governor in 2008, Strickland opened the state’s third trade office in China. Ohio is going for the gold, opening a global trade office in Beijing, just in time for the summer Olympic games. The prize for the state Department of Development isn’t medals, but, officials hope, profits for local companies expanding exports to China, particularly in Ohio’s struggling manufacturing sector. The Beijing office is expected to open later this month, the third new international office the Strickland administration has opened this year, bringing the state’s total to 14. That ranks Ohio second to Pennsylvania, which has 16 overseas offices, according to Ohio officials… The Beijing office will operate on an annual budget of $50,000, which includes pay for locally contracted staff. Another $15,000 has been budgeted for travel to and from the new China office through June 2009. The Australia and India offices cost $100,000 apiece annually. There are about 55 people employed by the state’s Global Markets Division in the 14 overseas offices and in Columbus; the division’s budget is $2.6 million this year. “This is consistent with our department of development’s efforts to expand trade around the world and to promote Ohio products,” Strickland said… In fact, the Beijing office is Ohio’s third in China; Ohio already has offices in Shanghai and Hong Kong. (The Cincinnati Enquirer, April 7, 2008)

In 2010, the Strickland administration awarded a $4 million taxpayer-funded loan to a Toledo solar firm, Xunlight Corp., despite knowing the firm was building a Chinese assembly plant. Xunlight filed for bankruptcy in 2014. Xunlight Corp., a Toledo manufacturer of thin-film solar panels, quietly opened an assembly plant in China early this year that has doubled the company’s employee base and will prepare the firm for international sales. President and CEO Xunming Deng said yesterday the company invested $2 million to open the facility, which has about 100 employees and is located in [Kunshan.]... The plant performs a lamination process that coats Xunlight’s thin, stainless steel solar cells, which are produced in Toledo. The laminated panels are then shipped back to the United States as well as to international markets… [The company] has received nearly $50 million in federal and state funding and other assistance to develop its research and production in Toledo… Local, state, and national politicians have touted northwest Ohio’s solar industry in the past two years, often mentioning the success of Xunlight’s growing business. At no time was it mentioned that the company had planned or had put into use a factory in China. Xunlight began speaking publicly only this week about the China facility… Ohio and local business development agencies said Xunlight has been open with them about the Chinese plant development since the plans were first being made. The numerous federal and state loans, grants, and tax incentives that the company has received include a $34.5 million federal tax credit approved in January, a $4 million state loan granted this year for the installation of a production line, and nearly $7 million in grants from [Third Frontier.] ... [Mark Shanahan, energy adviser to Strickland,] said state officials were aware of Xunlight’s Chinese plant and are confident that state funding has been used only for local operations. (Toledo Blade, November 18, 2010)

Xunlight Corp. filed for bankruptcy in 2014. Toledo solar-panel manufacturer Xunlight Corp. is bankrupt and plans to liquidate its remaining assets… Company filings in the U.S. Bankruptcy Court show Xunlight has about $1.9 million in assets but $28.5 million in debts. (Toledo Blade, November 25, 2014)

Rob Portman fights back against China when they cheat:
As former U.S. Trade Representative, Portman took China to court and won. “He hauled China before the World Trade Organization – a global trade court – after it put up hurdles to keep out U.S.-made auto parts. He threatened China again after it put up duties against kraft linerboard, a pulp product used for shipping cartons, and China backed down.” (Cleveland Plain Dealer, 5/23/10)

PolitiFact Ohio: "Portman was always my strongest ally when I wanted to take the Chinese to the WTO. He was a hawk on these issues. If I wanted to file trade enforcement cases on China I could always count on him."

Rob opposes bad trade deals like the Trans-Pacific Partnership. In a statement Portman said, "From currency manipulation, to rules of origin for automobiles, to protection for US biologics – we can do better.  And we need to do better for the sake of American workers who are depending on the Administration to give them a level playing field. ”

Portman stood up against his party and was even criticized by the Wall Street Journal editorial board when he led the effort to get tougher currency manipulation rules into TPA on the floor. While Portman’s amendment failed, his work led to getting better language in the bill. (Portman, Brown buck party lines on trade bill, 5/16/15)

Toledo Blade: An amendment sponsored by Sen. Rob Portman (R., Ohio) aimed at curbing currency manipulation — an anti-competitive practice by other countries that damages the U.S. economy — deserves lawmakers’ and the President’s support (To make trade truly free, lawmakers should support a proposal to crack down on currency manipulation, 4/27/15)

Rob was awarded the “2015 Congressional Steel Champion Award" from the American Iron and Steel Institute for his leadership “in championing improvements to the trade laws which help level the playing field so our industry can remain competitive."

Rob’s bipartisan Enforce Act was signed into law earlier this year. The legislation cracks down on efforts that hurt American workers by illegally importing goods and circumventing our laws.

When companies call Rob for help with trade enforcement and export cases, he delivers results:
ITC Ruling to Help Ohio Pipe and Tube Manufacturers – the U.S. International Trade Commission ruled on two important cases to crack down on countries like China that illegally dump their steel in the U.S. market, hurting Ohio steel manufacturers. This ruling came after Portman worked side-by-side with the United Steelworkers and a bipartisan coalition to protect oil country tubular goods being manufactured by hundreds of workers at plants throughout Ohio.

Rob has worked on a bipartisan basis on numerous trade enforcement cases to protect Ohio workers from foreign competitors who refuse to play by the rules. Rob has fought for Ohio products such as rebar, solar products, roller bearings, agriculture products, high-density pipe, specialty paper, hot-rolled steel, among others.