COLUMBUS, Ohio – Today, the Ohio Conference of Teamsters, representing over 50,000 members from across Ohio, endorsed Rob Portman in his re-election campaign for the U.S. Senate.

"On behalf of our 50,000 members in Ohio, we are proud to endorse Rob Portman," said Pat Darrow, President of the Ohio Conference of Teamsters. "When it comes to hardworking Ohio families, Rob Portman has our back. Rob is fighting for middle-class jobs and higher wages for the people of Ohio, and he has fought with us to protect our pensions. We look forward to supporting Rob and continuing to work with him in the U.S. Senate.”

"I’m honored to have the support of the Ohio Conference of Teamsters and I will continue to fight for Ohio workers in the U.S. Senate," added Rob Portman. "I’m proud to have these hard-working Ohioans on our team. We’ve worked to protect Ohio jobs and stop retirees from facing pension cuts as large as 70 percent due to no fault of their own.” 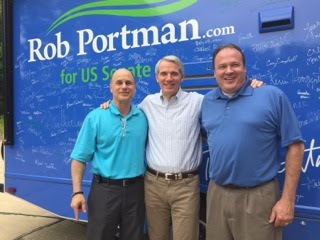 BACKGROUND
In 2006 and 2010, the Teamsters endorsed Ted Strickland.

Rob also recently received the endorsement from the United Mine Workers of America, who had previously supported Strickland as well.