COLUMBUS, Ohio – Today, the Portman for Senate Campaign released “Trafficking,” a new 60-second TV ad that begins airing statewide tomorrow. The campaign will spend $1 million broadcasting this ad across Ohio for the next two weeks.

“Trafficking” features Theresa Flores from Columbus, Ohio who fell victim to sex trafficking at a young age and is now a nationally recognized advocate dedicated to raising awareness and preventing sex trafficking. In the ad, Theresa details Rob’s bipartisan work to combat human trafficking and praises him for his support saying, "Rob’s work has given me hope that in the future others won’t have to go through what we did." You may click HERE or on the video below to watch “Trafficking.” 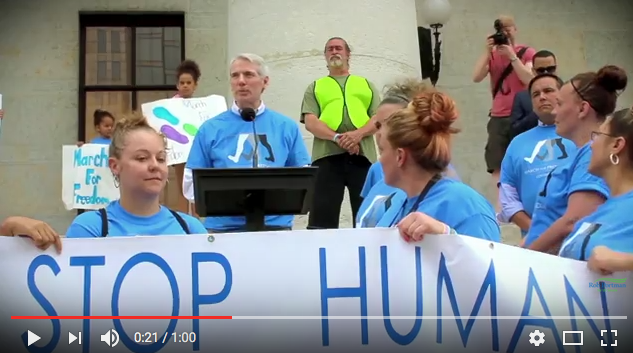 From Theresa Flores: “Human trafficking is the second leading crime in the United States and Rob Portman has brought this issue to light. He is passionate about making a change and his advocacy has really touched my heart. As a mom of teenagers, as a survivor of human trafficking, Rob’s work has given me hope that in the future others won’t have to go through what we did. No doubt, we need more people like Rob.”

Rob is the founding co-chair of the Bipartisan Senate Caucus to End Human Trafficking. The caucus, which Rob founded with Senator Richard Blumenthal (D-CT), provides a forum for senators to work across party lines on legislation to tackle the scourge of human trafficking.

Rob authored the Combat Human Trafficking Act of 2015 alongside Senator Dianne Feinstein (D-CA), which provides needed tools to law enforcement officials so that they are well equipped to investigate and prosecute those who commit sex trafficking crimes. This legislation was signed into law as part of the Justice for Victims of Trafficking Act in May 2015.

“Rob Portman has been leading the charge against human trafficking” Springfield News-Sun, 1/23/15“

Rob authored the Bringing Missing Children Home Act of 2015 alongside Senator Chuck Schumer (D-NY), which strengthens reporting and response procedures for law enforcement officers dealing with cases of missing children. This legislation was signed into law in May 2015.

In his role as chairman of the U.S. Senate’s Permanent Subcommittee on Investigations, Rob has focused on protecting some of the most vulnerable against sex trafficking, including minors. In 2015, Rob and the committee’s Ranking Member Senator Claire McCaskill (D-Mo.) launched an investigation into Backpage.com for its role as what some leading law enforcement say is a hub of online sex trafficking, particularly of children.

In November, the senators issued a subpoena to Backpage.com’s CEO Carl Ferrer asking for documents and business practices regarding their screening processes for advertisements dealing with sex trafficking.

Mr. Ferrer refused to comply. In response Rob offered a resolution in the U.S. Senate to hold Backpage.com in civil contempt of Congress. The resolution passed the Senate 96-0, making it the first time in 20 years that the Senate voted to authorize contempt.

Also as Chairman of the Permanent Subcommittee on Investigations, Rob led a six-month investigation into an egg farm in Marion, Ohio that enslaved a number of migrant children in terrible conditions including being "forced to de-beak and vaccinate chickens, load crates of chickens, and clean coops for up to 12 hours a day." Rob's investigation concluded that the Department of Health and Human Services was responsible for awarding custody of the migrant children to the trafficking ring. In response, the Obama Administration has since taken needed steps to strengthen background checks and ensure the safety of migrant children moving forward.

Rob authored the Child Sex Trafficking Data and Response Act of 2013 alongside Senator Ron Wyden (D-OR) to address the shortcoming of reliable data when it comes to the issue of child sex trafficking with a particular focus on children in the child welfare system. This legislation was signed into law as part of the Preventing Sex Trafficking and Strengthening Families Act and the Justice for Victims of Trafficking Act.

“Portman pushes for passage of the human trafficking bill” WKSU, 3/20/15

Rob authored the End Trafficking in Government Contracting Act of 2012 alongside Senator Richard Blumenthal (D-CT), which requires federal contractors to establish trafficking prevention programs. This bill was signed into law in December 2012.

Rob authored a child sex trafficking amendment, which was included in the Violence Against Women Reauthorization Act of 2013. The Amendment makes child victims of sex trafficking eligible to receive assistance under grants provided to enhance the safety of youth and children. This legislation was signed into law in March 2013.

Often times those responsible for the trafficking of individuals lure and keep their victims around by getting them addicted to drugs. Rob's Comprehensive Addiction and Recovery Act (CARA), which was recently signed into law by President Obama, will also play an important role in putting an end to human trafficking. Rob's CARA expands education and prevention efforts, helps law enforcement reverse overdoses, and expands treatment and recovery programs.

In January, Rob received the “Liberator of the Year Award” for his efforts to try to put an end to human trafficking.

In May, Rob received the 2016 Children’s Health Champion award from Voices for Ohio’s Children for his leadership in protecting children from human trafficking.

In May, Rob helped raise awareness of human trafficking by participating in the March for Freedom in downtown Columbus. This was the 2nd annual march for the organization that brings survivors and advocates together to join forces in putting an end to human trafficking.