COLUMBUS, Ohio – Today, the Portman for Senate campaign released its latest TV ad, "Teamsters," featuring Sonny Nardi, Secretary-Treasurer of Teamsters Ohio D.R.I.V.E.. Earlier this year, the Ohio Conference of Teamsters, representing over 50,000 members from across Ohio, endorsed Rob Portman in his re-election campaign for the U.S. Senate. "Teamsters" will begin running statewide today and is a part of the campaign's $15 million ad reservation. Click here to watch "Teamsters." 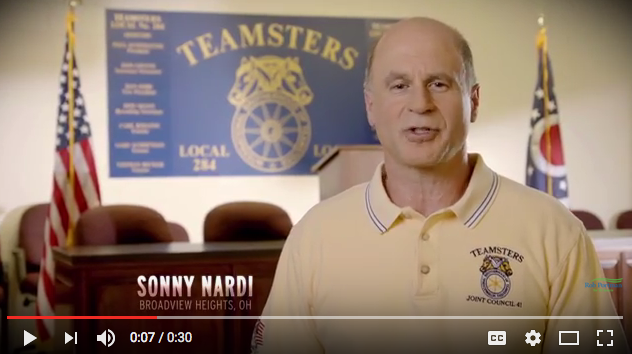 Sonny Nardi: For too long, working families have been let down by politicians who break their promises on jobs. That's why the Ohio Teamsters are endorsing Rob Portman. Senator Portman's word is his bond, and there's no stronger champion for American workers and American manufacturers. Rob is standing up to China to protect Ohio jobs. Take it from this Democrat and proud union guy: Rob Portman fights hard for working families.

In addition to the Ohio Teamsters, Rob also recently received the endorsement from unions representing over 100,000 Ohio families, including Ohio FOP, the IUOE Local 18, and the United Mine Workers of America, who all previously supported Strickland.