ICYMI: Strickland “out of view during the holiday”

On Friday, the Portman for Senate Campaign announced it surpassed 2.5 million voter contacts. These outreach efforts were on full display over the weekend with Rob, Jane, and the campaign’s grassroots team of nearly 2,000 interns and volunteers marching in 17 parades and attending several festivals all over Ohio.

Meanwhile, Ted Strickland’s low-energy, “invisible” campaign was nowhere to be found - making it an entire week since he has been seen in public. It was an unprecedented approach, and Ted may be the first candidate in American political history to take the Fourth of July weekend off - although he did find time to send a fundraising email on Independence Day.  Retread Ted’s absence over the holiday certainly caused some heads to turn. Don’t just take our word for it, here is what they are saying: 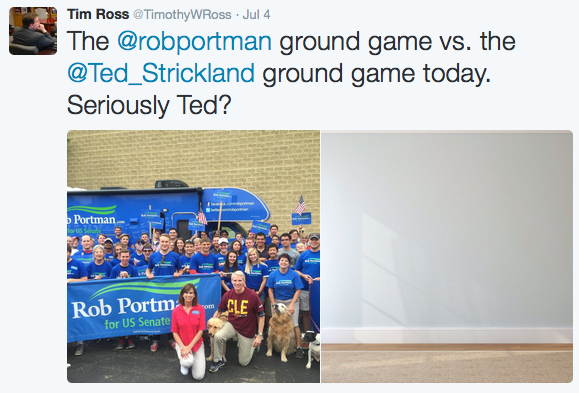 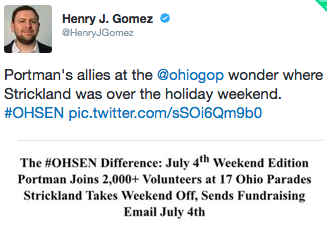 In a fundraising email sent Monday, Strickland, a Democrat running to unseat incumbent Sen. Rob Portman (R., Ohio), wished supporters a “very happy Fourth of July” before soliciting donations to the campaign for a recommended amount of $20.

Strickland, the one-time governor of Ohio, was largely out of view during the holiday despite the fundraising message. The Strickland campaign’s Facebook and Twitter accounts each posted only one message over the holiday weekend, and the campaign did not issue an official statement on its website celebrating the Fourth of July. Strickland also does not appear to have attended any events publicly marking the holiday.

Portman and his campaign interns and volunteers marched in 17 parades and attended three festivals in Ohio over the holiday weekend, according to a spokesman for the campaign.

Here is a side-by-side recap of the Team Portman and Team Strickland weekends:

Background:
In 2015, the Portman for Senate campaign launched an aggressive volunteer grassroots program that recently surpassed 2.5 million targeted voter contacts through its door-to-door and phone programs. In any given week, the campaign’s army of 500 full-time summer interns will knock thousands of doors talking to voters about the issues they care most about and why Rob is the best choice in the race for Ohio’s U.S. Senate seat. Last week, the campaign launched its seventh coalition with the addition of the Portman for Senate Small Business Coalition.

On Friday, the campaign’s outreach efforts and tech-savvy operations were highlighted in this Cincinnati Enquirer article:

…The Ohio Republican senator’s staffers are slicing and dicing the Buckeye State electorate into distinct target audiences. So when Portman volunteers go door-knocking in swing precincts, they don’t just hand out any old campaign literature. Different voting segments get one of 20 different door hangers, with the messages designed to appeal specifically to that swath of the electorate.

Volunteers are doing the same thing with digital ads and web videos. Concerned about your Second Amendment rights? You might get a Facebook ad explaining how Portman has defended them. Worried about the heroin epidemic? Talk to a campaign volunteer about the scourge and you might see a video pop up on your Instagram account.

“The greatest message in the world shown to the wrong audience is worthless,” says Corry Bliss, the super intense 34-year-old campaign manager for Portman’s campaign. “Some people get their news on TV, some on Snapchat, some on Facebook, so campaigns have to be more tech savvy than ever…”