ICYMI: Portman’s Union Endorsements “Sent Ripples of Surprise Through the State and Washington”

COLUMBUS, Ohio – Yesterday, the Portman for Senate Campaign announced a fourth union endorsement for Rob Portman with the addition of the International Union of Operating Engineers (IUOE) Local 18 - representing over 15,000 workers across Ohio. In another "political blow" to Ted Strickland, this marks the third labor union in the past ten days to throw their support behind Rob, and to make matters worse for Ted, IUOE Local 18 endorsed his campaign for governor in 2006.

Last week, the Ohio Conference of Teamsters - which represents over 50,000 members from across Ohio - and the Fraternal Order of Police (FOP) of Ohio - the state's largest law enforcement union representing more than 25,000 - endorsed Rob. In June, the United Mine Workers of America also threw their support behind Rob. This latest endorsement from IUOE Local 18 means that labor unions representing over 100,000 Ohio workers have analyzed the records of the two candidates in this race and concluded that Rob is the only candidate they can trust to fight for Ohio workers and families. The momentum is certainly behind the Portman Campaign as Republicans, Independents, and even Democrats are rallying in support of Rob. Don’t just take our word for it, here is what they had to say: 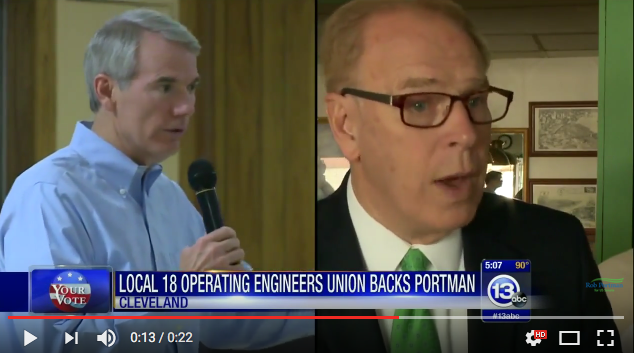 Toledo Blade: That makes the fourth major union that has previously supported Mr. Strickland to sign up with Mr. Portman. The other unions are the Fraternal Order of Police, the Ohio Conference of Teamsters, and the United Mine Workers. 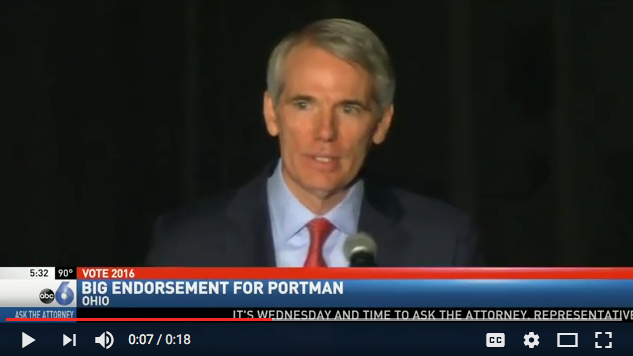 The Hill: Sen. Rob Portman (R-Ohio) has been endorsed by Local 18 of the International Union of Operating Engineers (IUOE), the fourth endorsement he has received from a union that backed his opponent in previous races.

Washington Free Beacon: The defection of several unions that normally back Democrats could be a big hit to Strickland’s campaign, as unions constitute a major voting block for Democrats in the swing state of Ohio.

Roll Call: In Ohio, Portman, running what many political operatives consider the best campaign of 2016, had $13.2 million on hand at the end of June, dwarfing Strickland’s $3.7 million. The GOP incumbent also received the endorsement of the Ohio Conference of Teamsters last week, an announcement that sent ripples of surprise through the state and Washington.

Background:
Portman has been a leader on permitting reform, and his legislation with Senator Claire McCaskill (D-MO) called the FAST Act was signed into law at the end of 2015.  This law is designed to streamline and improve the federal permitting process, which is currently laden with uncertainty and unpredictability that hinders investment, economic growth, and job creation.

Portman is the author of legislation with Senator Jeanne Shaheen (D-NH) called the Energy Savings and Industrial Competitiveness Act that has now passed the U.S. Senate. Rob’s legislation will create 190,000 new jobs by 2030.

Portman has worked with Senator Chuck Schumer (D-NY) on a plan to inject billions of new dollars into the federal highway fund to create good paying jobs and update our crumbling infrastructure. This plan would tax foreign profits of American companies and use this money to invest in our infrastructure here at home.

Portman also is a proponent of increasing oil and natural gas production in an environmentally friendly manner. As a member of the Senate Energy Committee, Rob has been an outspoken supporter of LNG Exports and projects like the Keystone XL Pipeline.

Portman strongly supports repealing the so-called 'Cadillac Tax' that would levy a new 40 percent tax on the healthcare premiums paid by Operating Engineers.