COLUMBUS, Ohio – Today, Politico's Maggie Severns reported on Rob Portman's army of interns and the campaign's aggressive volunteer grassroots program, which has contacted more than 1,900,000 targeted voters through its door-to-door and phone programs.

GOP Sen. Rob Portman is bringing on a whopping 500 interns to work full-time for his Ohio campaign this summer, part of an effort to build a sprawling field campaign capable of driving Portman to victory no matter what happens in the presidential race.

The interns will knock on doors and make phone calls, aiming to both sway voters and collect key information on their beliefs that will power targeted ads. Campaign officials want to contact 250,000 voters per week this summer, either in person or via phone.

Volunteers have been doing these campaign tasks for decades. But having hundreds and hundreds of young people signed up to work full-time, some of them for college credit, is highly unusual for a Senate campaign, observers said. Their presence signals the Portman’s campaign’s emphasis on person-to-person interaction and sophisticated targeting ahead of an election when the Republican might need support from Hillary Clinton voters to win, if the GOP’s fears about Donald Trump come true and he struggles in the presidential race.

“We want to have the most robust ground game that’s ever been put together,” Portman campaign manager Corry Bliss said. “We knew if we spent time talking to [students], this could be a wonderful statewide untapped resource.”

Recruiting manpower from Ohio high schools and colleges has been a priority since January 2015, campaign officials said. The main campaign office, in Columbus, was purposefully positioned just across the street from Ohio State University.

After opening each of its 10 campaign offices, field staff visited every college and high school within a 30-mile radius to reach out to young people there. All told, Portman staff have so far paid 1,000 visits to campuses and high schools; the senator himself has made more than 20, according to the Portman campaign.

Portman’s campaign is working to garner that support: It was the first Senate campaign to take out ads on Instagram, for example, and has embraced Snapchat advertising, too.

“We aren’t taking anything for granted, nor are we ceding anything to our opponent,” Bliss said.

Jordan Lyness, an intern who recently graduated from Ohio State University, said it’s “really cool to see something like that” from a politician. He found the Portman campaign through a campus job board and thought it would be a good opportunity to get involved in the community. Over the last year, Lyness said he’s knocked on close to 30,000 doors.

Lyness and his peers seek out independent voters identified by i360, the Koch brothers-backed voter-data company Portman is using. Canvassers can pick off 150 houses a day, where they ask pre-set lists of questions about voting preferences and beliefs and log answers into their phones.

Those answers can inform data-driven models that can identify ticket-splitting voters and help with targeted messaging. Last year, such data collection helped Portman build a list of 20,000 voters who supported Hillary Clinton but would side with Portman on the issue of the Iran nuclear deal. The campaign then targeted ads on Strickland’s support of the deal to voters online.

Work on the ground is one part of the broader equation for both Portman and Strickland. Portman had $13.5 million in his campaign account by the end of March, the last time the campaigns released fundraising numbers. Strickland trailed with $2.7 million, though he brings other advantages to the race, including higher name recognition and a long political history in Ohio.

“Given Senator Portman’s embarrassing lack of name identification and his total disconnect from Ohio, it’s a miracle his campaign could find 500 people who even know who he is,” Strickland campaign spokeswoman Liz Margolis said. “Portman is being forced to burn his campaign cash to build his own infrastructure, while Ohio Democrats are working together to win victories at every level.”

In a sharp contrast to Portman’s stand-alone field effort, Strickland’s work on the ground is pooled with Democrats’ campaign for Hillary Clinton in Ohio. More than 70 field staff have been hired in Ohio and the campaign will have hundreds of interns and volunteers this summer too, a Democrat with knowledge of the campaign said.

It’s possible, meanwhile, that Trump’s position at the top of the ticket has actually helped drive volunteers not interested in lending their time to the presidential race to Portman’s campaign, Ohio GOP consultant Mark R. Weaver said. Regardless, Weaver said the manpower is impressive.

“It’s hard to get 500 volunteers for a statewide campaign, nonetheless 500 interns,” Weaver said.

Background:
The Portman for Senate Campaign launched its Students for Portman coalition in September with campus coordinators on over 30 college and university campuses across the State of Ohio. This group helps the Portman campaign organize and mobilize students on campus and communicate Rob Portman’s record of fighting to ensure every student who wants a good job after graduation can find one.

Recently, the campaign’s army of interns, outreach efforts, and tech-savvy operations were highlighted in numerous articles across Ohio as well as on ABC 6 in Columbus. 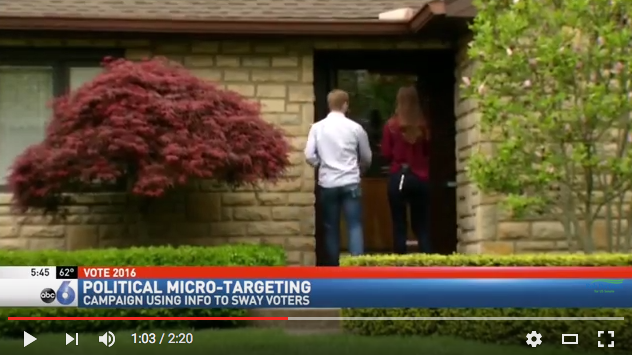 On the same day, two interns working for Portman’s campaign visited a Washington Twp. neighborhood on Chestnut Hill Lane. Ryan Harpst, 20, and Tom Ferrall, 18, are both University of Dayton students who went door-to-door, smart phones and literature in hand, asking residents what their big concerns were and assuring them that Portman shared their values.

“The grassroots, getting out and talking to people is very important,” said resident Rebecca Lochner, 60, a Portman supporter. “I love seeing young people being involved.”

Portman campaign manager Corry Bliss said they have contacted 1.7 million Ohioans — more than half of the Republican turnout in the March primary.

The campaign is less concerned with turning liberals into conservatives than it is in swaying undecided voters and energizing its base.

The Portman for Senate campaign has launched five coalitions: the African American Leadership Council, the Veterans Leadership Council, Women for Portman, Sportsmen for Portman, and the Students for Portman Coalition which has college chairs on over 30 campuses across Ohio. Portman has been endorsed by the Ohio Republican Party State Central Committee, over 500 key Ohio Republican leaders, and by over 15,000 grassroots leaders across the state.