COLUMBUS, Ohio – Yesterday, the Portman for Senate Campaign announced that the United Mine Workers of America’s (UMWA) National Council of Coal Miners Political Action Committee (COMPAC) endorsed Rob Portman for re-election to the U.S. Senate. The Mine Workers endorsement is an important recognition of Rob Portman's leadership protecting Ohio’s coal jobs, and is considered a major blow to Ted Strickland both because the group rarely endorses Republicans and because they endorsed the former Governor in 2006 and 2010. Don’t just take our word for it – here is what they are saying:

WOWK 13: The announcement “counts as a political blow to Strickland”

AP Ohio: Coal miners PAC backs Portman over Strickland for US Senate
The endorsement by the United Mine Workers of America's National Council of Coal Miners PAC came as a political blow to Strickland. The Democrat is a former governor and congressman native to eastern Ohio whose strong relationships with labor have helped him win elections. COMPAC backed both Strickland's gubernatorial campaigns in 2006 and 2010.

Strickland is tied to presidential contender Hillary Clinton, who alienated coal miners in March when she said "we're going to put a lot of coal miners and coal companies out of business.

Cleveland.com: A big endorsement for Rob Portman
The United Mine Workers of America, a union friendly to former Gov. Ted Strickland and other Democrats in past elections, has thrown its support in Ohio's closely watched Senate race to Republican incumbent Rob Portman…

It's a notable, if not exactly surprising, blow to Strickland, who represented Ohio's coal country in Congress. Last year, as Strickland was preparing his challenger to Portman, a union leader hinted that Strickland's move to the left on environmental issues was a potential problem.

Washington Examiner: Portman nabs rare union endorsement in re-election fight
Portman won the endorsement over former Gov. Ted Strickland, his Democratic opponent, who won the group's support during his gubernatorial runs in 2006 and 2010, but lost it this time around largely due to his work at the Center for American Progress, which is staunchly anti-coal.

In a letter, the group's National Council of Coal Miners Political Action Committee (COMPAC) thanked Portman for his efforts to support coal miners past and present, noting that they unanimously endorsed him. The letter did not mention Strickland. 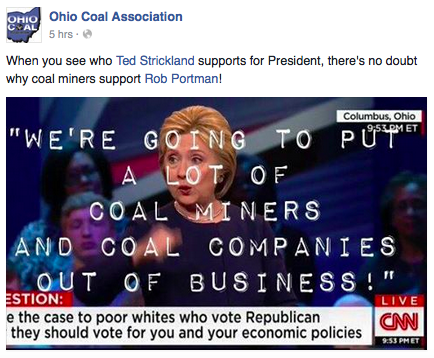 In March, 2015, after Mr. Strickland resigned, the Center for American Progress strongly endorsed the Obama administration’s plan to establish carbon-pollution standards for power plants that would likely further reduce demand for coal.

The Hill: Coal miners union backs Republican Portman in Ohio Senate race
The Wednesday announcement through the UMWA’s PAC is a rare endorsement of a Republican for a Senate race from the union.

Democrats’ support for organized labor has historically ensured that the party’s candidates would get the UMWA’s backing, but issues like President Obama’s environmental agenda and its impact on the coal industry have frayed relations with the party.

Former Ohio Gov. Ted Strickland (D) is running to replace Portman. The UMWA endorsed Strickland in his 2006 and 2010 gubernatorial runs and has only endorsed Democrats in Ohio races since 2010.

National Journal: Portman picked up an endorsement Wednesday from the United Mine Workers of America
At the same time, Re­pub­lic­ans say, the UM­WA’s de­cision to aban­don Strick­land after back­ing both of his gubernat­ori­al cam­paigns is a prime ex­ample of Demo­crats be­ing burdened by Hil­lary Clin­ton at the top of their tick­et. Clin­ton caused heart­burn for a num­ber of coal-state Demo­crats in March when she in­art­fully said she would “put a lot of coal miners and coal com­pan­ies out of busi­ness,” in ref­er­ence to clean-en­ergy plans.

Politico Pro: Mine workers endorse Portman
The United Mine Workers of America PAC today endorsed Portman in Ohio, an unusual move for a union that twice in the past endorsed Portman's opponent, former Democratic Gov. Ted Strickland. The PAC's leaders commended Portman for supporting the industry, "especially in such difficult times as the coal industry is experiencing today."

Morning Consult: Portman Gets Backing From Coal Miners Union
Unlike some endorsers, the group can hardly be defined as a reliable supporter of Republicans. It endorsed Strickland in both of his campaigns for governor, and in 2014, the union supported Kentucky Secretary of State Alison Lundergan Grimes over Senate Republican Leader Mitch McConnell – a move that earned the ire of some conservatives.

Portman, in a statement Thursday, said Strickland has turned “his back on Coal Country,” pointing to his advocacy while serving as president of the Center for American Progress.