When President Obama signed the clean debt limit increase that recently passed Congress, he squandered another opportunity to deal with an unprecedented national debt that now tops $17 trillion.

Under the Constitution, only Congress can authorize the United States to borrow money to pay its bills. And since World War I, Congress, recognizing the danger of runaway borrowing, has placed a ceiling on the amount of debt Washington can accumulate. Once that limit is reached, Congress either has to find savings to keep the debt from rising, raise the debt limit with or without budget reforms, or refuse to raise the limit, putting the federal government in a situation where it can’t pay all of its bills because it can’t borrow. There is a healthy debate over whether or not this last option means the federal government would default on its debt obligations. If debt were prioritized, current revenues could probably cover those payments, but that leaves many other critical obligations unfunded.

Going over the debt limit is not the right solution. But neither is simply raising the debt limit without doing anything to address the underlying problem, especially at a time of record debt.

The American people understand this. Think about it as parents: when one of our kids goes over the limit on the credit card, we don’t just pay the bill and ask the bank to raise the limit. We take steps to address the overspending problem and make sure it doesn’t happen again.

The American people expect that when Washington maxes out the nation’s credit card, the same wisdom applies. That’s why throughout the past three decades, the debate over the debt limit is the only thing that has resulted in any significant deficit reduction, including the 1997 Balanced Budget Agreement and the Budget Control Act of 2011 that saved the American people $2.1 trillion. Whether Ronald Reagan or Bill Clinton, Presidents of both parties have used the debt limit as an opportunity to sit down with Congress and work out meaningful plans for deficit reduction.

President Obama chose to turn his back on this tradition, refusing to work with Congress to reduce the deficit as part of a debt limit increase. That’s a shame. The debt limit is only relevant to the extent that it causes us to stop and reconsider how we are managing the nation’s finances. If instead we simply raise the debt ceiling whenever it is reached without any spending reforms, we might as well not have a debt ceiling at all. Given the unprecedented budgetary challenges we are facing, we cannot afford to be so irresponsible.

The nonpartisan Congressional Budget Office (CBO) recently painted a troubling picture of our economic future if Washington continues its borrowing-and-spending spree. Before President Obama came into office, the federal government had never run a trillion-dollar deficit. Since then, it has run four years of trillion-dollar deficits, and now CBO says there will be permanent trillion-dollar deficits returning within the decade—a decade in which the record national debt is projected to expand by another $10 trillion.

When it comes to our nation’s finances, we are witnessing a slow-motion train wreck. We can see it coming, and we know exactly what is causing it. We are not undertaxed; tax revenues as a percentage of the economy will soon exceed the historical average on their way to record levels. Discretionary spending—the 1/3 of the budget that Congress spends every year through the appropriations process—has been falling. What is driving our deficits? Nearly 90 percent of all new spending over the next decade will come from Social Security, health care entitlements, and interest on the soaring debt. These obligations make up the bulk of what is called mandatory spending. 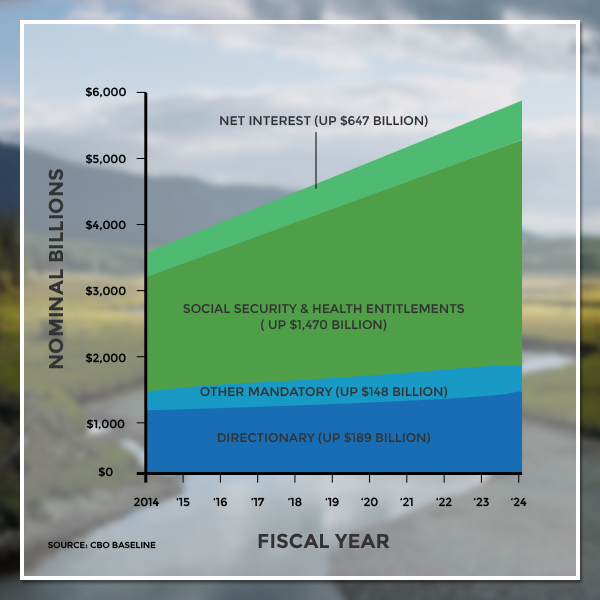 Every day, 10,000 baby boomers retire into Social Security and Medicare programs that are heading toward bankruptcy due to unsustainable costs. Social Security is already in permanent deficit and is on track for bankruptcy within 20 years. Medicare is just over a decade away from bankruptcy, a predictable result of the program offering $3 in benefits for every $1 the typical retiree contributes in Medicare taxes and premiums over his lifetime.