Rob Portman is a staunch defender of the coal industry and will continue to lead the fight for Ohio’s coal workers.

Ted Strickland once was a congressman from Appalachia who always claimed to support Ohio’s coal industry. But according to the Ohio Coal Association, he has done just the opposite. (1) In fact, Ted Strickland turned his back on coal jobs when he went to Washington. Strickland defended the Obama administration’s coal policies (2) and even said the “coal industry in Ohio has actually done pretty well under Mr. Obama.” (3) Most recently, Strickland ran the lobbying arm of a Washington special interest group that praised Obama’s anti-coal policies (4) and called Obama’s anti-coal rule the “most important federal effort to cut carbon.”(5)

The Ohio Coal Association says Strickland needs to explain why he “betrayed the people he used to represent in Congress and why he has been getting paid by a liberal Washington think tank for the past few years to advocate policies that are bad for Ohio coal, as well as anyone who turns on a light switch.” (1)

Rob Portman believes Ohio workers deserve better than what Strickland delivered as the head of a Washington special interest group or as governor when 350,000 jobs disappeared. 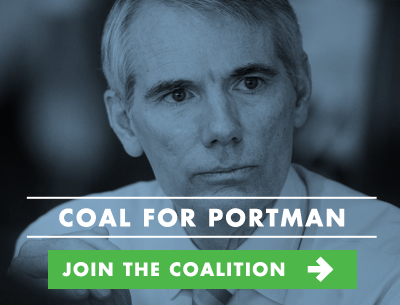 Coal For Portman
Join the Coalition