Rob Portman is a United States Senator representing the State of Ohio. He was elected to the Senate in 2010 by an 18-point margin, winning 82 of Ohio’s 88 counties.

Rob has built a reputation in the Senate as a conservative who is focused on building consensus to promote pro-growth policies that will lead to private sector job creation. Rob is a leading advocate for tax reform, regulatory reform, deficit reduction, and worker retraining reform to help create an environment for Ohio employers to grow and create good-paying jobs.

Despite the gridlock in Congress, Rob has had nearly 50 of his own bills signed into law, including legislation to combat drug abuse, fight human trafficking, improve the federal permitting process, reduce waste and fraud in government spending, and reform federal worker retraining programs so they work better for Ohio workers.

Portman is the co-founder of the Senate Caucus to End Human Trafficking, and he has authored legislation to combat human trafficking that has been signed into law to protect our children and bring criminals to justice. Rob is also a leader in the fight to protect Lake Erie and has passed legislation to help keep our drinking water clean. For more than two decades, Rob has been active in the fight against drug abuse. He started an anti-drug coalition in his hometown of Cincinnati, and has passed laws to address the heroin epidemic and help those struggling with addiction to get their lives back on track.

Rob was born and raised in Cincinnati where he lives today with his wife Jane and their dog, Chuck. They have been married for 30 years and have three children - Jed, Will and Sally. 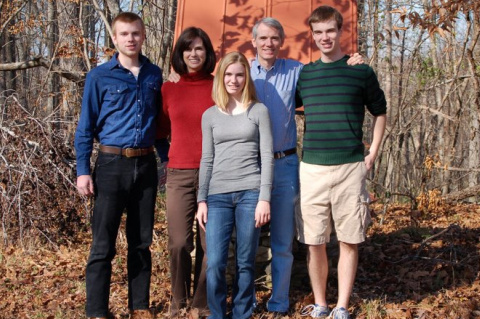 Rob grew up in an Ohio small business family, where he learned early on the value of hard work, leadership, and fiscal responsibility. When Rob was young, his dad, Bill Portman, borrowed money to start Portman Equipment Company, where Rob and his brother and sister all worked growing up.

Rob is still a small business owner. He and his brother are owners of the historic Golden Lamb Inn in Lebanon, Ohio. The Golden Lamb Inn is the oldest continuously operating business in Ohio and has hosted many historical figures, including twelve U.S. Presidents.

In 1993, Rob Portman was elected to the diverse, seven county Second Congressional District in southern Ohio. He represented the Second District for twelve years, and in seven elections, he never received less than seventy percent of the vote.

In 2005, Rob left Congress to serve as the United States Trade Representative. In his one year in the job, Rob was successful in reducing barriers to U.S. exports and increasing enforcement of trade laws to help level the playing field for American farmers, workers and service providers. Under his leadership, American exports increased and the U.S. brought successful legal challenges against international trade law violations.

Following his accomplishments as Trade Representative, Rob was asked to serve as Director of the Office of Management and Budget. A deficit hawk, Rob made his mark by proposing a balanced budget, fighting irresponsible earmarks, and putting in place new transparency measures for all federal spending.

In his free time, Rob enjoys biking, kayaking, hunting, and spending time with his family.