COLUMBUS, Ohio - The Portman for Senate Campaign has had an impressive start to the week with the release of its latest TV ad, “Coal Miner,” and Rob and Jane hitting the campaign trail in Pike, Jackson, and Scioto Counties.

Meanwhile, the past two days have been miserable for Ted Strickland as he faced news articles revisiting his prisoners scandal, bathroom renovations during the budget crisis, drug addiction funding cuts, and taxpayer funded cross-town flights, as well as news reports showing his Democratic friends over at the Democratic Senatorial Campaign Committee (DSCC) and Senate Majority PAC have cancelled almost $2.5 million worth of advertising on his behalf. Perhaps the Cincinnati Enquirer put it best when they said, Strickland "has been outraised and outmaneuvered by Portman." Unfortunately for Strickland, the week is not even halfway over yet.

Here is a midweek review:
*Note: Below is just a sample of Strickland's terrible headlines - we can't possibly fit them all in.

Monday, August 29th:
RealClearPolitics reported that "Strickland faces an uphill battle to change the dynamic of the race 10 weeks from Election Day."

Here is what 10TV in Columbus had to say about the RealClearPolitics report: 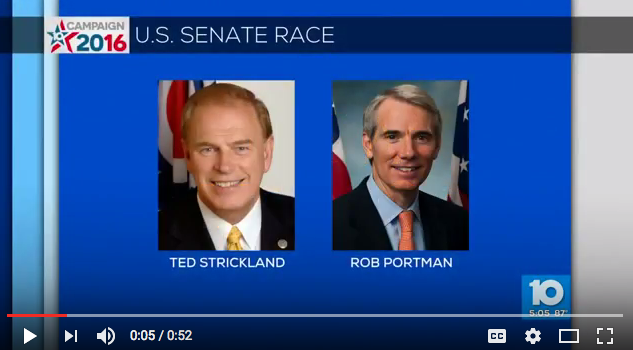 Also on Monday, multiple news outlets took a look at the many scandals that plagued Strickland's term as governor. Among the issues highlighted were Strickland's taxpayer funded cross-town flights, his taxpayer funded bathroom renovations during the budget crisis, his prison-gate scandal, and his drastic cuts to drug and alcohol addiction services. Here is what they had to say: 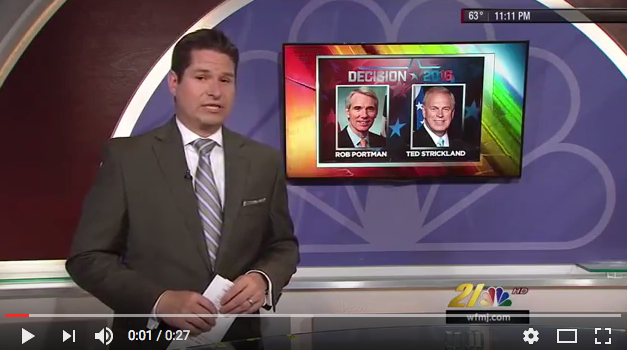 Columbus Dispatch: An inspector general’s report found Cathy Collins-Taylor, then the public safety director, scuttled a patrol sting to catch an accomplice throwing contraband over the wall to an inmate. The report found that Collins-Taylor took the action to spare Strickland from political embarrassment, with her and then-patrol Supt. David Dicken fabricating a “smokescreen” to hide the truth.

Gongwer News: The attacks, focused on state inmates working at the governor's residence, the payment for toilets  there, his use of a state plane and his work after being governor, are the latest against to focus on the  Democrat's tenure as governor as he challenges Sen. Rob Portman (R­Terrace Park) for his U.S.  Senate seat.

Finally on Monday, in a sign that Ted Strickland's low-energy, "invisible," underfunded campaign is hitting rock bottom, the Washington Post broke the news that the DSCC has cancelled over $500,000 in advertising on behalf of Ted Strickland saying, "The Democratic Party’s national Senate campaign arm has canceled more than a week of television ads that were set to run next month in the key battleground of Ohio, where former governor Ted Strickland (D) has struggled to gain traction against incumbent Sen. Rob Portman."

Here is what else they had to say:

Cincinnati Enquirer: But others will surely read the ad delays as a possible retrenchment of Democratic support for Strickland, who has been outraised and outmaneuvered by Portman.

Cleveland.com: The Senate Democrats' campaign wing has canceled about $500,000 worth of television ads next month on behalf of Ted Strickland, who has fallen behind in Ohio's U.S. Senate race, sources said.

Roll Call: Still, Democrats have grown increasingly concerned about Strickland's candidacy. The campaign has struggled to raise money and has badly lagged behind Portman in most public polls. The worry runs so deep that some Democratic strategists now consider the North Carolina Senate race — a contest that was garnering little attention when the summer began — a better pickup opportunity for the party.

Politico: Democrats, meanwhile, are pulling back in Ohio

Talking Point Memo: While the ad buy delay could merely be a delay, it fuels speculation that Strickland has proven to be far less competitive than the party had hoped in the race against incumbent Sen. Rob Portman (R-OH).

Tuesday, August 30th:
The Portman for Senate Campaign released its latest TV ad, “Coal Miner," which highlights how Ted Strickland turned his back on his former congressional district and southeast Ohio by moving to D.C. to take his "Dream Job" making $250,000 a year to lobby for Hillary Clinton and President Obama's war on coal. The ad is playing across southeast Ohio and will run through Election Day. The ad is part of the Portman for Senate Campaign's $14 million TV reservation. As a reminder, Rob was endorsed by the United Mine Workers of America in June. The union has a long history of supporting Democrats, including Ted Strickland in 2006 and 2010.

Washington Examiner: A mine worker called Ohio Gov. Ted Strickland a "turncoat" in a new ad for Sen. Rob Portman that focuses on Strickland's work for an anti-coal group in Washington, D.C.

Roll Call: The minute-long television ad will go on the air in southeast Ohio from now until Election Day, according to Portman's campaign. The ad is part of a $14 million statewide ad reservation that the Ohio Republican's campaign announced in May.

The Hill: A new television ad released Tuesday, calls former Gov. Ted Strickland (D) a “turncoat” who worked with President Obama and Clinton during his time running a think tank in Washington… The spot is designed to appeal to coal miners and their allies in Ohio, where companies operate dozens of mines near the state’s eastern border.

Politico: It’s a 60-second spot that ties Strickland to Hillary Clinton and accuses him of shirking the needs to coal miners. “Ted Strickland siding with Hillary Clinton. It's a slap to the face. They want to put us good working, hard working coal miners out of jobs,” an Ohio coal miner, Jerry Murphy Jr., says in the ad. “You can't turn your back on Ohio and then come back here and say 'I'm here for you.' It just don't work like that. Rob Portman is on the side of the coal miners,” another coal miner, P.J. DeLuca, says.

E&E News: Portman has hit Strickland repeatedly during the campaign as an opponent of the state's coal industry, criticizing Strickland's former post at the Center for American Progress, a liberal think tank in Washington, D.C. Portman has also touted the endorsement of the United Mine Workers of America's political action committee, which backed the Republican in June in a break from its typical support for Democrats.

Columbus Dispatch: Portman has decided to link Strickland with Democratic nominee Hillary Clinton — particularly her controversial March 2016 statements on coal. To add insult to injury, Portman is airing these ads in coal country, where Strickland, a former longtime congressman, once found a very affectionate group of supporters.

Also on Tuesday, Rob and Jane hit the campaign trail meeting with voters in Pike, Jackson, and Scioto Counties. Here are some pictures from their travels: 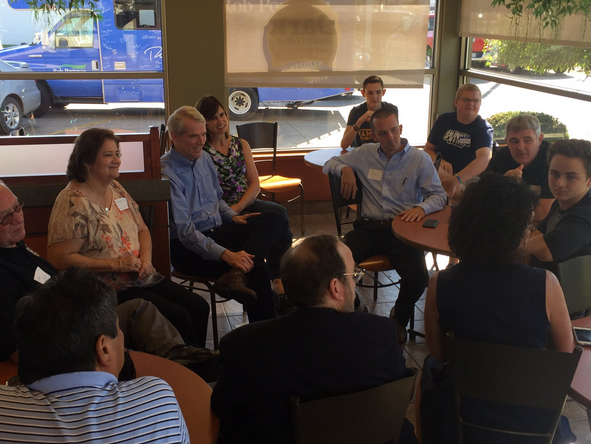 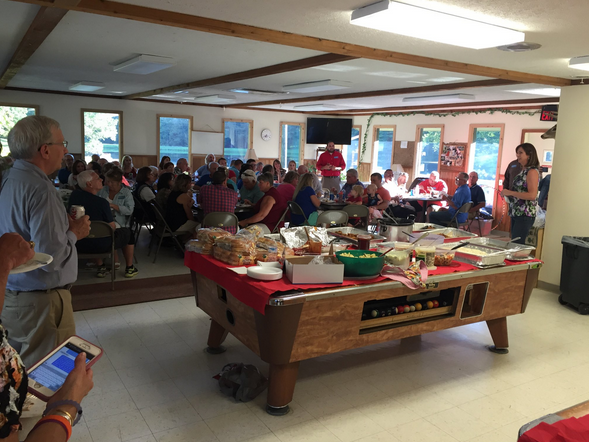 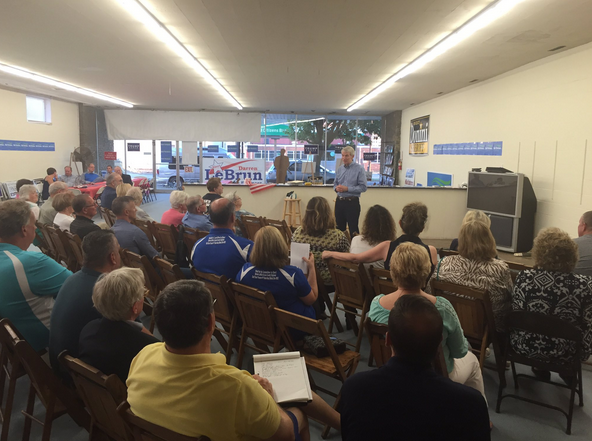 Meanwhile, the political blows continued to pour in on the Strickland Campaign as The Hill broke the news that along with the DSCC, Harry Reid's Senate Majority PAC also cancelled over $1.7 million in advertising on Strickland's behalf in Ohio - further proving that national Democrats are spooked at Strickland's low-energy, "invisible," and underfunded campaign. After spending more than $20 million attempting to cover up Ted Strickland's record, even Democrats are resigned to the fact that he has the worst record of any Senate candidate in America. No amount of money can hide the fact that when Ted was governor, Ohio lost more than 350,000 jobs and ranked 48th in job creation. Here is what they had to say: 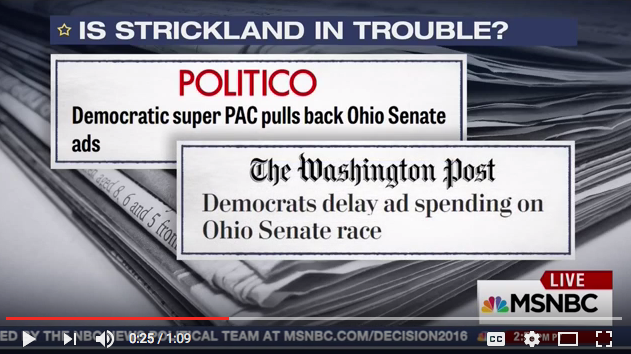 FOX News: Senate Majority PAC Pulls The Plug On A New Set Of Ads...Presumably Over Poor Poll Numbers For Strickland 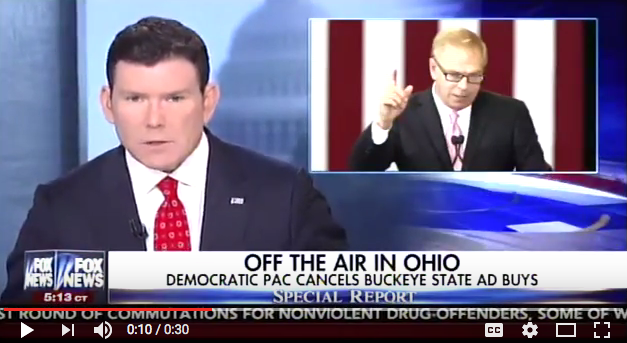 Associated Press: A leading Democratic political action committee is canceling ad buys in the Ohio Senate race. It's the second major group to do so as Democrats increasingly appear to be losing hope of winning back the key state.

Toledo Blade: In a sign that Ohio Gov. Ted Strickland’s campaign for the U.S. Senate is struggling in his challenge to U.S. Sen. Rob Portman (R., Ohio), two independent groups that were paying for Strickland TV ads have scaled back their spending.

Cleveland.com: Overall, though, these moves are hardly a good sign for Strickland, who has trailed Portman in recent polls and in fundraising. And it means that the only Strickland ads on the air in Ohio for two weeks in September will likely be from the Strickland campaign itself, while Portman and other allied groups continue their advertising barrage against him.

Politico: The delayed ad-buying by national Democrats by no means presages a Democratic withdrawal from Ohio — but it does represent a change in tactics as Strickland lags behind Portman by more than 7 percentage points, according to RealClearPolitics averages. Other top-tier Democratic Senate candidates in Pennsylvania and New Hampshire are outperforming Strickland in their races against incumbent Republican senators.

Roll Call: Senate Majority PAC is delaying by two weeks a planned TV ad campaign in support of Ted Strickland, the Ohio Senate Democratic nominee whose campaign has unexpectedly struggled to gain traction against Republican Sen. Rob Portman... The former governor has struggled to raise money against the well-funded Portman, and polls show him lagging badly against the Republican incumbent.

RealClearPolitics: The wave of advertising delays from Democrats is a sign that Ohio is looking increasingly difficult state to flip in their favor this year. Portman has opened up a significant lead in the polls – he leads by 7.5 percentage points in the RealClearPolitics average – and Strickland has not led in a public poll since May.

Cincinnati Enquirer: The super PAC's decision comes as the Democratic Senatorial Campaign Committee decided to delay, by one week, its plan to spend as much as $10 million on the Ohio race. As first reported by the Washington Post, the DSCC ad campaign was slated to start on Sept. 13, but the first week of ads has now been cancelled.