COLUMBUS, Ohio - Today, as Ted Strickland joins Hillary Clinton in Columbus for her speech on the economy, the Portman for Senate campaign announced it purchased a Snapchat "geofilter" surrounding the event. The filter reminds users in the vicinity of Fort Hayes Metropolitan Education Center that when it comes to jobs and the economy, the worst thing to happen to Ohio in the last 100 years was Ted Strickland. When he was Governor, Ohio lost more than 350,000 jobs - thousands to other states and other countries - and ranked 48th in job creation.

An image of the filter is below. Users can snap a picture and place the filter on top of their photos. The filter will be active for the rest of the day. 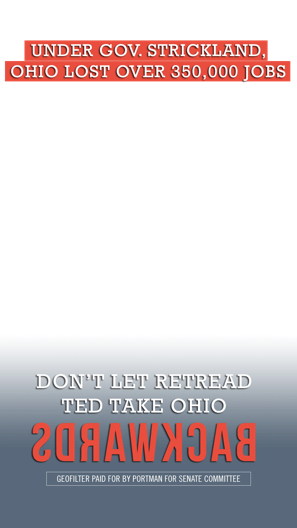 "Since former Governor Ted Strickland’s low-energy, ‘invisible’ campaign is desperate to hide his record from Ohio voters, we are using Snapchat to remind them," Portman spokesperson Michawn Rich said. “This race is very simple, if Ohio voters realize the Ted Strickland running for Senate is the same Ted Strickland who was governor when Ohio lost more than 350,000 jobs - thousands to other states and other countries - and ranked 48th in job creation, he cannot and will not win this election – period.”

The Portman for Senate campaign is running an aggressive, 21st Century tech-savvy campaign, which includes these highlights:
Last month, the Portman for Senate Campaign was the first Senate campaign in the country to reserve airtime through Election Day, placing more than $14 million in statewide television airtime and $1 million in YouTube inventory through Google's advertising network. The effort will use highly sophisticated targeting methods to deliver community specific content across Ohio.